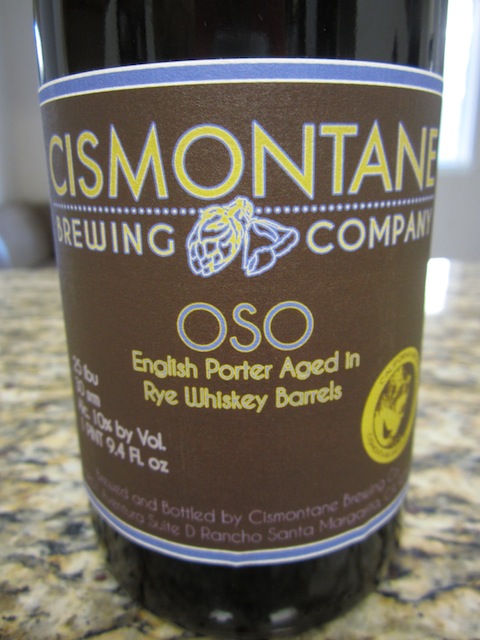 Earlier this year, I made mention of two beers in the pipeline from Cismontane Brewing in Rancho Santa Margarita.  And one of them, Oso (bear in Spanish) is my birthday beer for 2013.  A singular honor bestowed yearly that is on par with getting an Oscar or a GABF medal.

All hyperbole aside, here is what the brewers behind Oso have to say about it: “The English yeast imparted a symphony of dark fruity esters which compliment the tasty vanilla/ caramel notes, graciously donated by the Rye Whiskey barrels.”

I certainly liked the smoothness of this beer.  Plus the 10% abv displayed no heat at all.  I got lot’s of vanilla notes and also some baking bread aromas.  You could really taste the underlying porter underneath the whiskey which some barrel aged beers just can’t do.  As it the beer warmed up, I detected some spice notes underneath as well.  Between this big beer and the light Holy Jim Falls XPA, Cismontane has the beer style gamut covered. 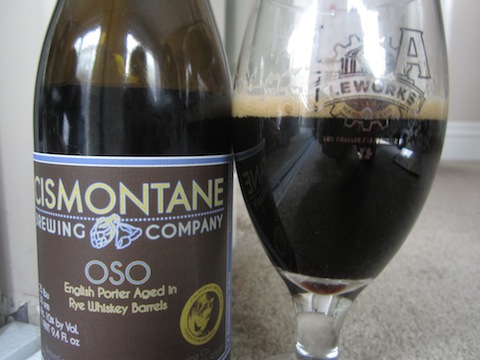 I also have a second birthday beer in mind.  It is the release of a collaboration between Ohana and the in Kickstarter phase L.A. Aleworks.  It will debut at Beer Belly tomorrow night and you should check it out!