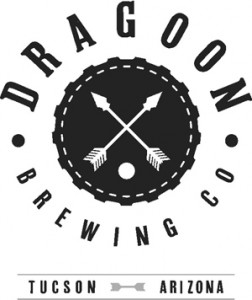 Our next stop in Arizona takes us to Dragoon Brewing Company was founded by Bruce Greene and his son Eric “with a simple goal in mind: to increase the quantity and quality of local beer in the Arizona market.” And I say kudos to anyone who is brave enough to take the leap from home brewing to the pro ranks.  It is hard leap and sometimes people who write about it forget that.

After Eric founded a homebrew club (Northern Arizona Homebrewers) and studied at the  American Brewer’s Guild and Harpoon Brewing, he returned to Tucson and with Tristan White, another home brew member created Dragoon.

After perusing their website, I decided what three beers would have to be in my initial taster tray if I find my way to their brewery….

This beer starts at a relatively low gravity, and thus finishes with a low alcohol content (about 4.8%). Make no mistake though, it is by no means a light beer. It is rich with roasted malt, bittersweet chocolate, and a touch of herbal hop flavors. It is made from a blend North American and British base malts with rolled oats, chocolate, brown and caramel malts. We finish it with a great big dose of earthy American hops (Sterling, Willamette, and Northern Brewer).

Ryelander is a beer that’s easy to wrap your head around: it’s a big, spicy, hoppy Imperial IPA. It ravages taste buds, decimates olfactory receptors, and leaves even the heartiest neuron begging for mercy. It is brewed from a blend of pale, crystal, and rye malts (with just a touch of roasted barley for color). We add many pounds of hops to the boil, and many more directly to the fermentation vessel. The result is an undoubtedly aggressive beer, but like its namesake, it shows a surprising depth and complexity. Bière del Bac
Named after San Xavier del Bac, our Belgian-style quad is deep reddish amber in color, with the aroma of dried fruit, caramel, and a hint of peppery alcohol. It is brewed with piloncillo sugar and dark Belgian candi syrup for complexity. It’s perfect for those cold winter nights.