Starting at Double Mountain on 4th in hilly Hood River with a single hop beer using the Zappa Hop, Blessed Relief which was different in a good way. That was a taster, followed by a short pour of the collaboration with Solera with Citra and Strata and it was super different in a not good way to me.

Next up was lunch in the river at pFriem with the family (a quorum of the fam, at least) and a sparkling IPA which was fine but I probably should have gone a sampler route or a kriek with the berries in the salad.

Back to Portland with the traffic and a stop at the former Commons, Modern Times location at the corner of Belmont that is now…

…where I had short pours of a Cerne Pivo dark lager that was excellent. Malty with depth but not weighed down. The space, if memory serves, is in the same layout with the bar at a diagonal and the seating at slices of lumber in an L shape around the windows. Plus lots of green punctuated by a cool white menu board…

…with the taps arrayed like a flock of organized birds. I also tried the Great Notion DIPA collaboration and boy was that an orange bomb. One of the most orange beers in both aroma and taste that I have had.. Maybe it was the hop hash or the Phantasm powder.

Last of the day was Chelsea pre-season on the TV at Away Days for a Post Match Italian Pilsner which was not as sprightly as I hoped but still good and the Home and Away IPA, I also have a cream ale of theirs to try. I just adore the footy names of the beers like Der Klassiker. 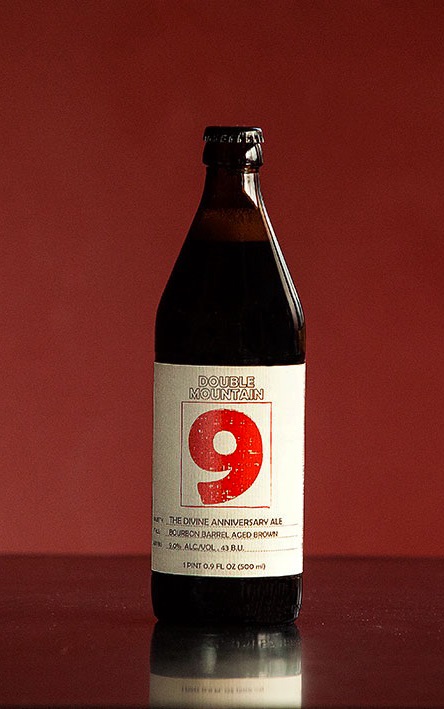 My favorite and (I think) lucky number is 9. So when I saw the label for the latest anniversary beer from Double Mountain Brewery of Hood River, I knew that I would have to search it out. The Divine is “a bourbon-barrel aged brown ale of ethereal character. The strong brown ale base brew left to meditate in Woodford Reserve bourbon barrels for the better part of a year. The celestial slumber brought forth wondrous flavors and aromas of wooden vanilla, toffee, caramel, black licorice, and dark fruit, accompanied by a pleasant bourbon warmth.”

Normally, the Four Horsemen of the Apocalypse would raise dread in me but if it comes from Double Mountain Brewery in Hood River it means four great beers.

Double Mountain Red War
“Strong Belgian-style Red Ale. A big yet very approachable beer. Lots of fruity complexity (banana, cherry, apricot), without a lot of the smoky phenols and higher alcohol notes of many Belgian ale strains. The fermentation finished dry, but with residual sweetness from a blend of light and dark crystal malts.”

Double Mountain Black Famine
“Belgian-style Quad. The third in the Four “Horsemen of the Apocalypse series, Famine brings you closer to the dark side. Black and chocolate malts were used sparingly so as to not get in the way of the wonderful dark fruit esters characteristic to the Ardennes yeast strain. The nose gives you toffee, dark fruit, and raisin, while a creamy vanilla rounds out the middle. Fruit and ripe banana flavors hang on the tongue, finishing bright.”

Double Mountain Pale Death
No description from the website but I would love to have a sampler tray of this group.

Double Mountain of Hood River has added Vaprorizer to its regular line-up, joining their Kölsch, India Red Ale, and Hop Lava NW IPA. Vaporizer was a seasonal last summer, and it must have passed the test to graduate a level.

It is a Pale Ale which features hops primarily of the Challenger variety, grown on a single farm in the Yakima Valley and Gambrinus malt. Brewmaster Matt Swihart and his crew dry-hop Vaporizer to amp up the hop. It is 6.0% alcohol by volume with 50 bittering units.

French for “good idea,” “Bonne Idée” is an Americanized Saison (8+%) from the “other” Hood River brewer, Double Mountain.

If you get the chance, try this at Saraveza in Portland or at the brewpub in Hood River. (Also check out their other fantastic seasonal, Molten Lava)