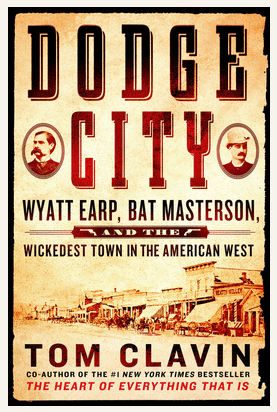 Print the myth. When it comes to the Wild West, that was the standard but Tom Clavin cuts through the show to the facts beneath in his book about the notorious Dodge City.

The focus is squarely on Wyatt Earp and Bat Masterson how they policed Kansas and other parts of the West and all of the people that gravitated into their orbit including Wild Bill Hickock, Jesse James, Doc Holliday, Buffalo Bill Cody, John Wesley Hardin, Billy the Kid, and Theodore Roosevelt.

The book is set-up in a vignette style. Chronological from birth to Event A to Event B and because the duo had such an eventful life, you can be excused for feeling exhausted after a while. 3/4 of the way through the book, I was hoping that either would settle down and marry someone other than an “frontier entertainer”. You almost need a flow chart to help manage all the names and shifting positions. Was Bat a Sheriff of a county or the undersheriff. Then next year he was a town marshall or was that Wyatt?

There is a tremendous amount of research here and it does cut away the myths effectively but it does sort of skimp on the city of Dodge itself. I would have liked to known more about it. With Earp and Masterson moving so much, the author follows their exploits and leaves Dodge behind a bit too much.

I did find out some fun facts. Bat Masterson ended up in New York as a sportswriter of all things. Mentoring the golden generation of NY sports journalists. Wyatt’s older brother Virgil is buried in Portland, Oregon which is cool to know.

Beer Wise, gotta find some or trade for some Tallgrass Brewing beers from Manhattan, Kansas. Buffalo Sweat Stout or A Campfire Classic are perfectly suited for a tale of the prairie.

Or you can go bitter and get the Stone Revolver Series. Get it. Revolvers. Gun Play. A bit too on the nose maybe.

Getting really to the point there is a Tombstone Brewing and they have a Little Wyatt beer.

The second half of the L.A. summer season is here, time to load up the ‘fridge with warm weather beers and start to be amazed at how early the fall seasonals are on shelves.

~ e-visits to three breweries from with the Beer Bloggers Conference landing in Milwaukee, we visit three Wisconsin breweries.
~ special featured reviews of Unibroue beers
~ Heads-Up on Los Angeles Beer Events
~ Three suggested beers to buy this month. One light, one medium and one dark
~ A Book & A Beer reads Dodge City by Tom Clavin
~ I will tap the Firkin and give my no holds barred opinion on the craft beer world.