In the photo above are Creature Comforts Brewing founder David, Chris, and Adam who are bringing a bit of Georgia to Los Angeles with a new brewery and taproom next summer!

The answer as to why a a Georgia brewery would open in the gritty part of DTLA can be found in an Avengers movie. Thor was seen drinking a Creature Comforts canned beer in Endgame. Joe Russo half of the Russo Brothers directing team is a fan of the beer from filming Marvel spectaculars in the state. He has also has been in the foodie scene in LA. in the nearby Arts District.

Add it all up and it means that means we lucky LA beer fans will get some of their excellent beers fresh.

Once that blush of excitement wears off, there will be some questions. Can Creature Comforts re-create the same magic away from the home base of operations? Will L.A. breweries weakened by Covid19 be battered further by a Hollywood backed outsider?

I know that I want some Tropicalia for sure.

Now, let’s talk about this year’s collaboration beer for the fest…. 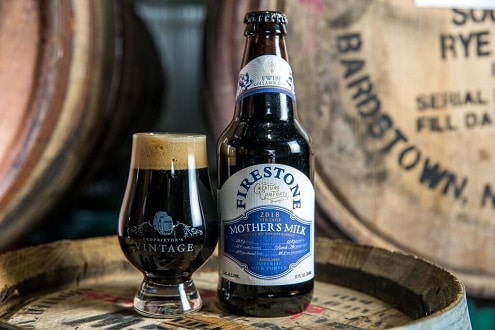 This year’s beer started at the festival, last year as Creature Comforts and Firestone Walker came together to brew up what would become Mother’s Milk, a barrel-aged imperial milk porter.

Mother’s Milk is a bigger beer at 11.6% ABV. It was “aged for nearly a year in rye whiskey barrels inherited from a premium spirits producer” with added oats, lactose sugar and sea salt. 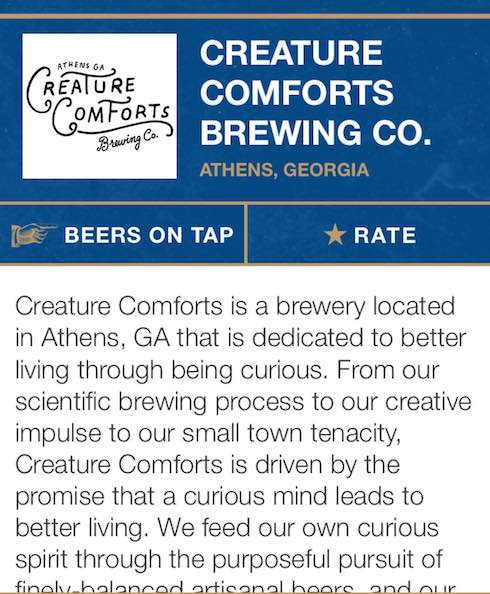 Days before I left for Paso Robles, I saw the Creature Comforts logo somewhere on the interwebs either about a new beer or a new to canned beer and I made a mental note to try to try their beer at the FWIBF.

Thankfully, I got a taste of their Tropicalia IPA at the Friday night party and was smitten with it. Which is hard to do in such a crowded category. I sampled some Tritonia the next day and was impressed by that as well.

With those two on board the taster tray, here are some others to try the next time you are in Georgia.

Bibo® – Pilsner
“Bibo® (pronounced bēbō) is a true pilsner with ingredients from five different countries that has a pronounced continental hop flavor and aroma in an incredibly well-balanced package. We use an enormous amount of the classic Czech Saaz and a touch of Motueka hops from New Zealand to put a new world twist on this beautiful old world style. Motueka offers a subtle pineapple note that underlies a harmony of the traditional black pepper, herbal, and cracker grain character pilsners are famous for. Bibo® is dry, quenching, and frankly amazingly delicious.”

Cucumber and Lime Tritonia – Gose
“With a touch of coriander and sea salt, you can say this beer was Triton-born. We made a Gose and we’re calling it Tritonia. This limited release offering was made with Cucumber and Lime and is available in kegs and serving at your favorite craft beer bars now.”

Automatic – Pale Ale
“We are bringing back our seasonal American Pale Ale, Automatic! Automatic is a modern pale ale with an ABV of 5.2-¬‐percent that features a prominent hop flavor and aroma. The beer appears hazy and straw colored with densely packed and persistent white foam. A mix of Mosaic and Crystal hops are used to create a delicate balance and give the beer an aroma that features a complex array of berry, citrus, herbal and pine notes.
The name Automatic is a nod to the community in which we are located – Athens, GA. It’s a reference to the slogan of a local restaurant, Weaver D’s that inspired one of REM’s most prolific albums – Automatic for the People.”

Reclaimed Rye® – Rye Amber aged on French Oak
“A uniquely complex and flavorful amber ale. French oak and rye malt lend to a well-rounded body with delicate undertones of toasted bread, spice, and subtle vanilla. We set out to show a new light onto the amber style with this beer, and to reclaim it back from the ordinary.”

Tropicália® – American IPA
“A balanced, soft, and juicy IPA. Ripe passion fruit and citrus hop aroma lead to a full, fruit-forward hop flavor that washes over the palate, ending with subtle bitterness. Some folks say they don’t like hoppy beers, and to that we say that hops do not equal bitterness. Hops offer a whole world of flavors, not just bitterness. In Tropicália®, they exude a luscious fruit journey your palate can enjoy over and over without fatigue.”