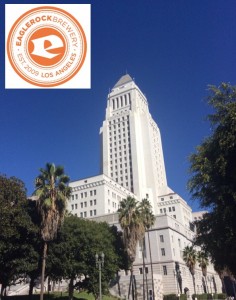 Once again Eagle Rock Brewery was hauled downtown to answer for their crime of running a brewery in the City of Los Angeles.

The fourth time in five years. And each visit is preceded by paperwork and fees for the paperwork not to mention time spent away from brewing.

This time, as with all the others, there was no opposition save for a City Hall gadfly who was anti-alcohol only and who all but said that he had never visited the brewery.

Obviously, the tide of support coupled with the impeccable way ERB has conducted itself carried the day. But only in LA could a win seem so ungratifying.

First this hearing only produced a “recommendation”, granted it was the one they wanted but now the paperwork goes to another back logged department to be approved or denied or changed. If it passes as I fully expect it to, ERB will get a determination letter. If no one appeals that letter in 15 days, the ruling will stand.

If all goes as planned (knock on wood), then these hearings will finally cease.

And though the hearing was smoothly run and by the book, the lack of knowledge about the brewing industry was clearly evident. This process needs to change and guess who is doing that too, yup, Eagle Rock.

The city desperately needs to hire someone with knowledge of beer, wine and spirits. An Alcohol Czar, who can rewrite the inane rules that force a brewer to complete a paperwork decathalon just to open. And then doesn’t stop there. This czar could also cut through the paperwork and be a one stop shop. Where the toughness needs to be is afterwards. Bad actors should be fined when they do wrong. Right now, you are assumed guilty until proven innocent. Four times.