As the winter beers continue in our distanced year, we get a little sour but also wise with Winter Sage from Cascade Brewing with grocer Market of Choice. The beer is described as a “sour wheat ale aged in oak barrels for up to 10 months, then infused with fresh, locally grown sage, white tea, lemon peel, coriander and Oregon coast sea salt.”

If money were no object, you would find a menagerie of Cascade beers in my beer ‘fridge. As it stands, I can only really look for the special beers and the above would be absolutely perfect for Thanksgiving. The apple and spice combo will really tie into that meal.

When sour titans like Cascade and Bruery Terreux tag team on a beer with an Oregon fruit – marionberries and a California fruit – Meyer lemons, does that mean the resulting beer will be twice as sour? 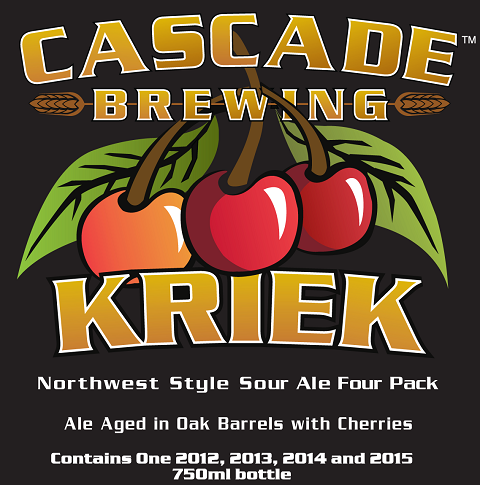 If you want to fill your cellar with years of beer in one purchase then the latest news from Cascade Brewing will help you bulk out your collection. The Portland blendery is releasing a limited series of Vertical Reserve Box Sets. 100 four-packs is all that will be available and each will hold bottles of a single brand from the past four years’ releases: 2012, 2013, 2014 and 2015.

Each of these sets will set you back $100. But considering that many bottles are tucked into bar bottle lists or unavailable means it makes the deal more appealing.

Kriek was recently released and future releases will drop on the first Friday of each month. It may not be feasible for many to trek north for it but maybe this idea will permeate and other breweries may use this new type of variety pack.

Traditionally, I break out the more expensive beers for Christmas and New Year’s Eve. The holidays demand something more, in my mind.

This year, a bit of a change-up though. I had a Gose from Cascade to pop as 2014 became 2015 but decided to save it for a different type of taste test. A Colbert Platinum version. (Sad to see that show go)

I brought a Gose and my beer buddy Richard provided the Black Tuesday (2014) and we proceeded to have a light vs dark but both over $30 session. 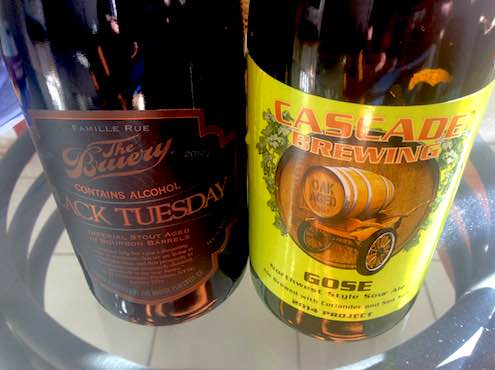 The Gose starts off with a green apple aroma coming off the well laced glass. The salt is in the foreground but not in a savory way until it sits for a bit. I took one sip near the end of the glass and it was a bit more concentrated. The sourness does bite. The mouth does pucker. This is certainly one of the more straightforward examples of the style. Especially considering that Cascade is not shy about additions of fruits and spices. After it sits for awhile, a ton of floral aromatics show up. Almost potpourri like.

The 2014 Black Tuesday begins with a hot aroma. That heat extends to the taste which is also quite syrupy. So to start it seems the balance is off. Was this meant to sit longer? Lots of chocolate and maple syrup taste. Their is some coconut from the barrels but the alcohol runs over that taste. Overall, the dominant flavors are syrup and caramel.

On a positive note, the near 20% alcohol doesn’t warm up the cheeks or burn on the way down which is good. But I just wish it wasn’t so syrupy. I keep thinking pancakes when drinking.  I think I will age my bottle a few years. 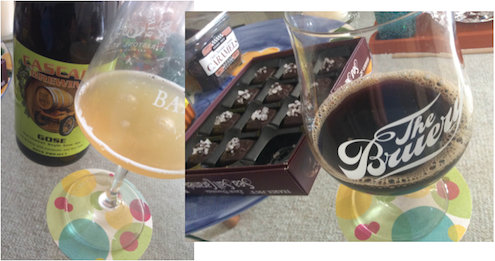 The winner for me was the Gose.  It had multiple elements going on and despite the high salt factor it was still quite tasty to drink.

I am a big fan of the unique beers from Cascade. And it is cool that they are having a new location to serve them from. This new one sounds way cool.
“We’re really excited about our offering for this year’s festival: Frite Galois is a light farmhouse ale aged for three months in white port barrels. It has a nice clean sourness with a crispy, lovely nose. It is really bright, and has some influence from the Noyeaux, previously aged in the same barrels.”

The old adage that you learn something new every day is so, so true. 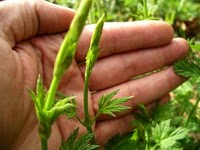 Just read this bit from the Cascade Brewing folks….Brewmaster Ron Gansberg is somewhat of a visionary, and he’s at it again. This week he’s in the hop fields, picking pounds of fresh hop shoots. Why? He’s going to pickle them, using white wine vinegar and several bottles of Cascade Kriek Ale. Young hop shoots are a culinary delicacy enjoyed in Belgium – they have also been called poor man’s asparagus! Fresh hop shoots are only available from mid-March to late April, after which they develop a bitter taste. Pickled hop shoots make a delicious garnish or tasty hors d’oeuvres. Look for them on the menu when the Cascade Barrel House makes its debut!

Barley Brown Fresh Hop IPA Roadside: Employing country roadside hops from Baker City, Oregon, this beer is a kind one of kind. Brewer Shawn Kelso says “It’s pretty hoppy and at 7.25% ABV you may want to just call it an I.P.A. It was brewed with fresh hand picked unknown hops that grow wild on the side of a road here in Baker City. I put 36 pounds in a 3bbl batch. It’s pretty damn tasty!”

from Raccoon Lodge and Cascade Brewing comes…
the “recently released our newest “Kabalorater,” which is the second in a series of beers made in collaboration with the PDX Home Brewers Club. Brewed by club member Alan Ruoff, Mt. Hood Honey Moon is a deliciously sweet barrel conditioned beer with Mt. Hood hops and undertones of honey. The crisp beer features a nice backbone of German malts and weighs in at 5%. It’s an ideal summer refresher!”

Lipschmacker Gose – A NW version of a historic German wheat beer that was almost lost to the world. Unlike most beers from Bavaria which are Lagers, or bottom fermented, this beer was historically top fermented. Gose which originated in the small town of Goslar, near Leipzig which at the time was outside Bavaria and did not have to adhere to Reinheitsgebot, the German purity law. This historical wheat beer was made with the addition of coriander, and hint of salt. It then under goes a second lactic fermentation. Similar in style to a Geuze, but with a slight hint of spice. This is a perfect beer for quenching your thirst the heat of summer. It is 4.8% alcohol by vol.