Thanks to beer buddy Richard, I got a nice mix of Bruery cans to sample. So let’s try three!

Ruekeller Helles – Pours a bright yellow color. Nice foamy head to it. Super crisp. So much grain notes here. Really good. Nice earthy hop aroma to this. Makes me want to have others in the German influenced Ruekeller series.

Wit the Funk – Wow this is tart and acidic. The spice is downplayed to feature the wheat as is the citrus. Would have enjoyed 12oz more. Stomach started to churn. But this is a really well made beer and the pairing possibilities are endless.

Unwind – This Offshoot Hoppy pils interesting. I get some tea like tannin notes, orange Tang and a little danky muskness. The bitterness really lingers on the palate. Missing is the pils part of the equation. This could be labeled hoppy lager or hoppy blonde to me. Thumbs up overall though.

In a bit of a departure for my intrepid dark beer correspondent, a sampler tray was tasted! I know it is heresy but to truly appreciate the dark beer side of life you must check the lighter side. Here is the report: 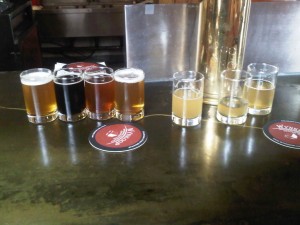 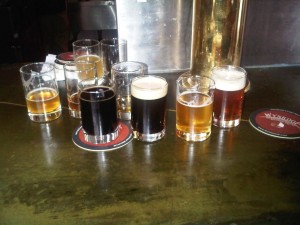 “Ignore the glasses in the background. Still working right to left

My notes were getting fuzzy by this point.