I must say, that I get more excited by Stone releases that are missing hops.  It is out of their wheelhouse and the chances of something exciting happening are heightened.  Like seeing an actor in a comedy that usually does drama.  (Crowe in The Nice Guys, see it.) So I was anticipating cracking open the media bottle that I received from Stone of the junior high school named Scru Wit. 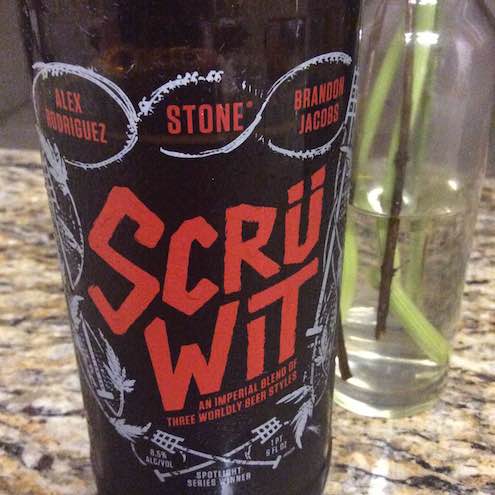 This Stone Spotlight is imperial for sure. And very well spiced.  It is primarily Wit to me followed by Sahti and Gruit. I like the creativity of it. I would like to see it in a lighter ABV version as well where some of the spices could pop even more because this is a little too cheek warming. Balance is there but this is still a heavy beer. The spice really sticks with you and the malt bill is heavy. Sense a trend? Heavy.