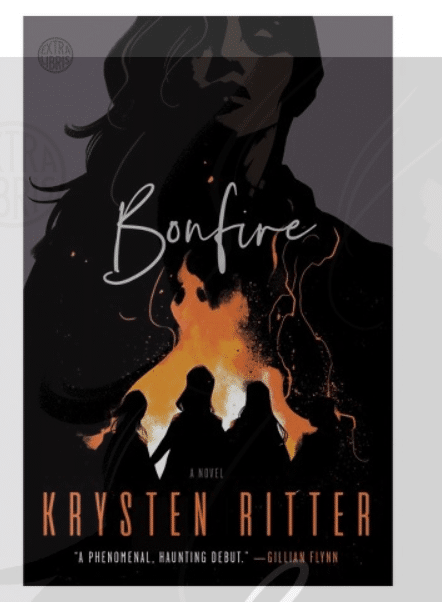 I picked up this book at the library based only on the fact that I watched both seasons of Jessica Jones and really liked the show, so with curiosity, I started reading Bonfire by the actress Krysten Ritter.

And despite the book’s subject matter being Sharp Objects Lite, I thought that it could be a thriller for good summer reading. But there were just too many by-the-book plotlines and characters that made it read like something that even Netflix would not stream. The wounded lawyer returning to rural roots, the troubled father, the poisoned water, the sassy gay friend, the cliques of high school, drinking to excess and the the easy sex that inevitably follows. By the time the final plot twist arrives, it is of the “explain everything” variety. Not much nuance to be found.

Since the book is set in Indiana and California doesn’t get much Hoosier beer (even though I saw listings for breweries such as Book & Brew and Burn ‘Em Brewing). It left my choices to smoke beers or to sours from Upland Brewing Co. Cherry and Crimson being two that I have seen on shelves. Or even deeper cuts, if you are into trading like Cauldron Wild Ale or Dark Before Dawn Saison.

August. The end of the silly festival season is in sight and maybe we will see an early slide into fall so that we can slide from lighter pilsners over to heavier malty options. Unfortunately, I do not control the weather but I do control the contents of the blog where we will be covering…

~ e-visits to three breweries from New York
~ special featured reviews of a TBD style
~ Heads-Up on Los Angeles Beer Events
~ Three suggested beers to buy this month. One light, one medium and one dark
~ A Book & A Beer reads Bonfire by Krysten Ritter
~ I will tap the Firkin and give my no holds barred opinion on the craft beer world.