I have had a few Jubelales this year but let’s focus on the alternate Deschutes Jubel, Cherries Jubelale.

“This new take on the beloved Super Jubel receives a dessert-inspired twist with the addition of cherry and vanilla to its rich barrel-aged malty decadence. Barrel-aged in wine, the beer brings in the flavors of Jubelale, but with added strength and complexity from barrel aging.”

Craft brewing is about creativity and we need that creativity brought by people like Local Plastic at every business step of a brewery. With the massive spike in to-go 4 and 6 packs, we need to find ways to think about making this better. Like these cardboardy holders from Highland Park Brewery.

Most SoCal beer fans will have seen and most likely had a few Deschutes beers but Boneyard does not have a footprint down here so will be lesser known. Think of it as the heritage brewer / older sibling getting together with the rough edged / younger sibling. You can read more HERE. But I expect that more neighboring breweries may combine forces. Some will work and some will divorce later depending on how well they can balance the union.

We stay in Oregon for a stout from Goodlife Brewing in Bend, Oregon. Now I drove over the “pass” from Salem to Bend in November and there were moments where my hands were glued to the wheel for sure. A stout beer at the end of the journey would have been welcome indeed.

We head to Bend where Monkless Belgian Ales and the Gold Medal for Belgian Style Abbey Ale in 2020 resides.

Here is what I would add to an initial taster tray….

Capitulation Dry-Hopped Tripel – “What do you do when customers say “I love hoppy beers”? Well, if you’re any other brewery you might brew 6 different IPA’s for them to choose from, but if you’re Monkless, you capitulate, and dry hop your classic Belgian Tripel. We took one of our favorite beers, The Trinity, and dry hopped it to add a blast of flowery, citrusy hop aroma.”

Pour Pour Pitiful Me Quadruple – “This girl has been through it! Aged and fermented over cherries to produce a ripe and full flavor profile, this brilliant Belgian-style quad is rich with deep, dark fruits and just sings in the glass.”

Brother’s Bier Belgian Single – “If you know Monkless, you know we’re not known for brewing small beers – that said, we wanted a clean sessionable beer to share as the warm summer months approached us. We were inspired by the Trappist tradition of the Belgian Single. Brother’s Bier is a SMaSH beer brewed from Pilsen malt and Sterling hops, and fermented to a nice dry finish with our traditional Trappist yeast strain. A late hop addition of Sterling adds a bit of spicy, citrusy hop aroma and flavor to the quintessential fruity-spicy yeast character of a classic Belgian Single.”

I love that each year a new artist is selected by Deschutes to design their seasonal and I love that they call it a “festive” winter ale. This is a must have for me every year.

I had been to Bend way back in college days. Back when Deschutes was probably the only game in town.

Now it is a major beer city. Warranting it’s own line in the Beer Advocate places in Oregon.

My goal was to check out Crux Fermentation and Ale Apothecary. And from there, everything else would be gravy. I got one out of two and the gravy.

Before I got to Bend, I so had to stretch my legs from the long drive from Portland, so I stopped in at the Sister’s Saloon and enjoyed a Boneyard staple, RPM IPA. It was a great start to the Bend beer overview.

First stop was Crux where I ordered up two fresh hop beers. One a pale and the other a lager. Neither struck me well though the bumping crowd with barely a seat to spare seemed to be enjoying the nice selection of beers on offer. I had better luck with their Sonoma charity IPA which had a really layered bitter flavor. The location is typical for a brewpub. Industrial area with food trucks nearby that is slowly gentrifying around it.

I sampled two beers from the Old St. Francis where I was staying. The Backyard Special Bitter and Let’s IPA. The former was the clear winner though it would probably have been better to order something on the porter/stout or rauchbier tip to pair with the fire pits in the courtyard.

I missed out on Ale Apothecary. Limited hours and nothing on Sunday meant that I was not yet in town when it was open. But happily, GoodLife is right next door and I found a pair of fun beers in my sampler tray. Tossed a British IPA was nice and balanced. I also liked the Sour IPA – Secret Stash 004. And, of course, Sweet As was just that.

Two other notable stops to relate. Sunriver Brewing has a lovely spot on Galveston near Growler Phil’s (get it?) where I had my favorite of the trip a hazy DIPA, Parkes & Wreck. The best place to drink a beer was Bend Brewing which has basically a little park overlooking Mirror Pond. An extremely peaceful spot to enjoy a beer.

As is my usual, I missed more than I tried. I didn’t visit a bottle shop or the newer breweries. But it just means that I will have to go back.


I read a lot. And I read a lot of beer books. What I have come to appreciate are the histories of the craft beer movement. Be it of a style, a brewery, or going up a rung, the larger, beer scene of a region.

Bend Beer – A History of Brewing in Central Oregon slots into that last history as author Jon Abernathy starts at the beginning of beer in Central Oregon and takes us up to just about before the sale of 10 Barrel Brewing to SABInBev. 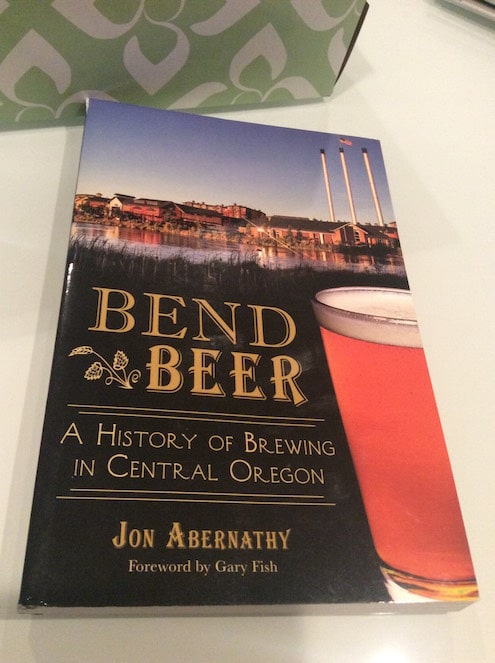 Abernathy, the blogger behind the Brewsite beer blog has a tricky territory to cover. The City of Bend plus Sisters and Redmond just don’t have a lot of meat on the bone in regards to beer history. Partly due to population and also prohibition, the heat doesn’t really rise until the first mention of Deschutes Brewing.

Once that happens you almost need a genealogical chart to map out which people left Black Butte Porter behind and what brewery they started. For the most part, Abernathy doesn’t lose you in all of what I call the “begats”, the biblical dead spots where we learn who everyone’s ma and pa is.

It is fascinating to see how each brewery got started. Though I would have liked to see more about how the city and community played a part in the brewing evolution. Was Bend amenable politically to craft beer? Did they make it easy to open up shop? What beers did the people of Bend gravitate towards? Is there a discernible Bend terroir?

Unfortunately, Abernathy has already spent 1/2 the book before even getting to Gary Fish and Deschutes. But that is also the strength of the book, I am reeled in and want to know more and more. Let’s hope an updated version is around the corner.