Wine grapes are practically everywhere in beers. Maybe a side effect of the fruit beer craze that we are in. But this recent quad of Lambics from Tilquin looks great. The Pinot Noir version would be my top choice.

Belgian brewer De Ranke has a new beer… a dark ale aged on wood. Divert your eyes from the local IPAs for a second and see if this one pops up of the foreign section. Dark ales are fun palate cleansers to have.

I am a sucker for a brewery history book. Even when that book is also filled with recipes (beer and/or food) and other miscellany.

“This book offers you a unique look behind the scenes of St.Bernardus: from the rich history to the brewing process and the recently renovated visitor centre. In addition, you will be served various national and international recipes and cocktails by various top and starred chefs, in which the beers of St.Bernardus play the leading role.”

Obviously this book will not be an exhaustive bit of research, but I am adding it to my want to read list

I was just talking about my relative lack of a good rum experience so this could be a nice start to re-think rum.

Author Jeremy Banas dives into the three iterations of the Celis Witbier in his book about Pierre Celis and his journey from Belgium to Texas and back and, at least to me, it reads as a cautionary tale about the business of beer.

Twice, Pierre Celis ran into financial roadblocks and twice he sold. Once to the predecessor of SABInBev and once to Miller to keep his brewery afloat. Both times the beer was quickly changed to cheaper ingredients and Pierre would find himself persona non grata at the office.

Granted the first sale of the Belgian brewery was precipitated by a destructive fire but to then head to Austin and get figuratively burnt again after the Michael Jackson tells you that selling would be a bad plan seems like a person who needs a financial guru in their corner so that Pierre could focus on being a brand ambassador and brewer.

The third attempt led by Pierre’s daughter Christine has also ran into financial issues as well as having to fight to regain the Celis name and to weather a pandemic.

Throughout it all the Hoegarden nee Celis White stands the test of time when it comes to the witbier style. And I certainly hope that, this time, if the brewery falls that the recipe or “name” not be sold again.

Once you get past the undercapitalized portion of this story, you see the drive to keep a beer style alive and the pure love of beer that Pierre had and with each page turn, I wanted to visit Belgian breweries more so in that respect Banas succeeded in his tale.

I just saw a photo of the bottle for the fifth batch of the Duvel Barrel Aged series. It has all sorts of fun design touches from the box, to the etching in the glass, the little sticker over the cap. Not to mention the beer inside. Here are those details: “ Duvel master brewer Hedwig Neven wanted to reinvent the ‘barrel aged’ concept and went looking for a rum distillery instead of bourbon barrels. He found it on the other side of the ocean, in Barbados, a world away from the brewery in Puurs: The West Indies Rum Distillery.”

If only it would come stateside.

This month I have a second cool label, this one from Green Cheek in Anaheim.

Such a cool name and the color scheme works really well and knowing brewer Evan, this will be a heck of a beer.

It can be easy to just forget all but are local breweries with so much choices available. Happens to me all the time which I how I missed two beers from Gulden Draak that look mighty special. Under the Cuvée Prestige moniker they have a straight bourbon barrel-aged beer and they also have a Laphroaig barrel-aged version. I found you spot them, you might want to grab for a special occasion.

If you thought the world of Belgian beer was easy to peg, well, You have to look for more than just the Trappist seal. Jeff at the Beervana Blog has compiled a helpful list that I know I will check back to in 2020.

Look at the rundown, right HERE.

I do not know when this beer came about, if it’s a retired beer or if it is being sold in the US but when I saw that Guinness spun two of their beers into a blend with Timmermans of Belgium, I really wanted it.  This Lambic meets stout is a mix of Guinness West Indies Porter (1801), Guinness Special Export (first brewed in 1944 exclusively for John Martin) and Timmermans Oude Kriek (the world’s oldest lambic brewery).

The description from the Timmermans website sounds delicious, “A unique dark beer with a subtle pink hue in the foam. Aromas of chocolate, oak & cherry. Full flavoured and beautifully balanced.”

We head out of country for our next holiday beer…. 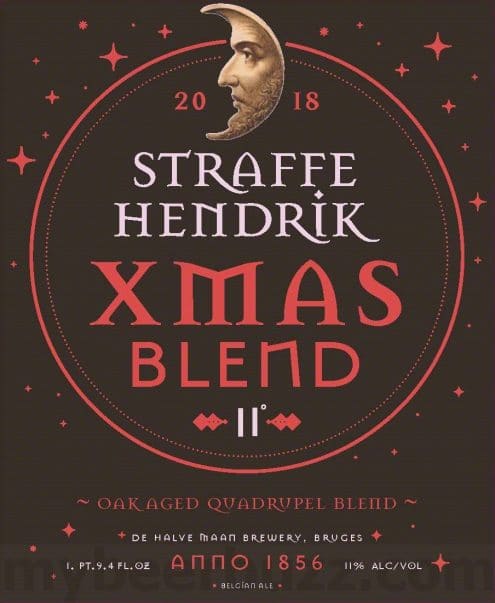 Straffe Hendrik from Bruges in Belgium has their Xmas Blend II. The beer is a Belgian quadrupel aged in oak at a not insubstantial 11% abv.