Be on the lookout for a lovely sampler pack of Lindeman’s lambic ales. You get “one 8.45 oz. (250 mL) bottle each of Framboise(raspberry),  Pêche (peach), Kriek (cherry) and Apple (aka Pomme) lambics.”

You can spot a Russian River label from a mile off. Both the sour side and the hoppy side are distinct and unchanging. And not to cast aspersions on them but these new Saisons have really classy and timeless looks to them…

…and both of the duo promise great old-school Saisons inside. And will make for an interesting taste test of both.

This 16oz can is “a traditional Belgian style Tripel Ale. Complex flavors of sweet bread, cracker, and spice make this beer perfect for your holiday season.” There are quite a few English, German and Belgian beers that I need to re-acquaint myself with. I recently had Omer blonde ale and was reminded how great it was. Fantome is another brand that I should sample more of and this new sour offering is now on my watch list.

I really enjoyed the Vanilla Porter that KS came out with and the BIPA is a style that I enjoy as well. Toss in the New Zealand hops and I am in.

“Blackball is a Belgian-inspired India Pale Ale with a robust West Coast hop profile. Belgian ale yeast, coriander, and Curacao lend a fruity and spicy character for an ale bolder than your average IPA. A blend of New Zealand and Cascade hops add a vibrant floral aroma and clean citrus hop bitterness that lingers through its crisp, dry finish. Drink up while it’s young, heavily hopped IPA’s are best enjoyed fresh.”

It is fascinating to see how American brewers are influencing old school Europe. 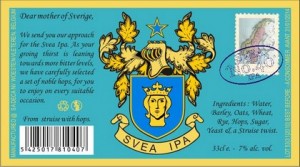 The brewery says this about their new offering, “We send our approach for the Svea IPA. As your growing thirst is leaning towards more bitter levels, we have carefully selected a set of noble hops, for you to enjoy on every suitable occasion.”

Now even a venerated brewery like Struise is upping the hop ante.

I got a growler of this for the Super Bowl. Perfect for parties!

Even though Sierra Nevada did not choose my award winning short film for the Beer Camp contest. I will continue to both drink and pimp out their beers and projects because I believe in the beer they make even though their taste in humor is obviously skewed. (My poor acting had nothing to do with not making the top 20 of course.)

So here is the slightly abridged (juicy bits) from the latest Sierra Nevada press release.

“For nearly 1000 years, monks have been brewing ales behind monastery walls. Their closely guarded traditions and techniques produced styles of beer unlike anything else in the world. These unique Trappist-style Abbey ales are known for their uncompromising quality and compelling flavor. In 2011, Sierra Nevada and the Trappist-Cistercian Abbey of New Clairvaux are working to bring this centuries-old tradition to America with Ovila—the nation’s only authentic Trappist-style Abbey Ale.

This series of three Belgian -style Abbey ales is made in accordance with the centuries-old tradition of the monks. Each beer will be only be available for a limited time and will rotate through the seasons. The first beer in the series, scheduled for release in March, will be a Belgian-style Dubbel brewed with authentic Trappist yeast. The second beer in the series, scheduled for release in July, will be a Saison, the traditional Belgian-style farmhouse ale made in honor of the Monk’s dedication to labor in the fields surrounding their abbey. The third will be released in time for the holidays. It will be a Trappist-style Quadrupel rich with dark fruit flavors and the unique wine-like characters of these strong Abbey ales.

Proceeds from this project will benefit the monks of the Abbey of New Clairvaux in their efforts to rebuild an architectural marvel—a 12th century, early-gothic Cistercian chapter house—on their grounds in Vina, California a few miles north of Sierra Nevada’s home in Chico. The medieval chapterhouse—Santa Maria de Ovila—was begun in 1190, near the village of Trillo, Spain.

Cistercian monks lived, prayed, and worked there for nearly 800 years. In 1931, California newspaper magnate William Randolph Hearst purchased the abbey and shipped it to Northern California. Hearst’s plans were never realized, and the stones fell into disrepair. In 1994, the Trappist-Cistercian monks of the Abbey of New Clairvaux, gained possession of the ruins, and began the painstaking stone-by-stone reconstruction of the historic abbey.

Located in Vina, California, the Abbey of New Clairvaux is a Cistercian Abbey of Strict Observance (Trappist). The abbey was founded in 1955 on 590 acres of Leland Stanford’s famed Vina Ranch. The monks follow the Rule of St. Benedict—Ora est Labora (Prayer and Work) and spend their days in prayer, meditation, and tending to the labor of the working farm located at the abbey.”