Welcome to 2014 of the craft beer calendar!  Have you had a mind altering, world bending beer in the first two weeks?  I certainly hope so and if not, I will suggest three that might do the trick.  All were recently seen at the large Arroyo Parkway, Whole Foods which has a wonderful selection to choose from.

An Italian take on the classic German style and at a very affordable price for beer shipped in from the “boot”.

“An homage to our roots and craft-brewing heyday of the early ’90s, Maris Otter and Special B malts give a big, sweet background to a palate of Horizon, Willamette and Galena hop varieties.”

“Shegöat is a brand new beer to our lineup, based on one of Patrick’s original, multiple award winning homebrew recipes. Based primarily on the traditional weizenbock style of Germany, brewed with both malted barley and wheat, the beer is rich in the flavors of bananas, cloves and caramel with a notes of cake spice hovering in the background. Just like the banana bread that großmutter used to make.” 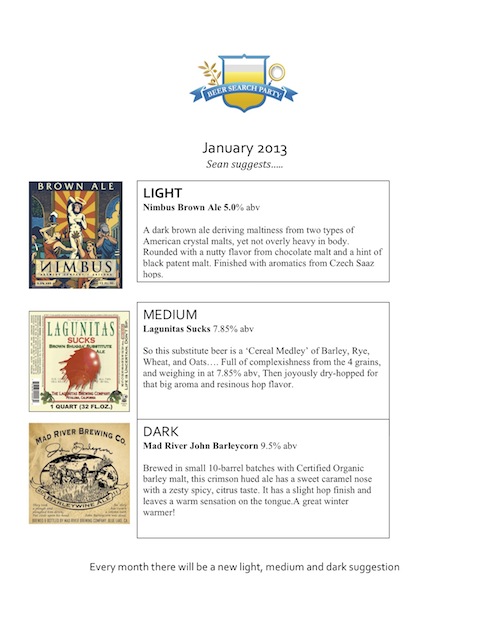 Or you can pick up the PDF version here….Sean suggests for January 2013

Been back from the Great American Beer Festival for a couple days and getting back into the swing of the blog again with the monthly beer shopping list….

This month, the shopping list tries to stay low ABV in deference to the summer sun and succeeds. From Germany to Montana and finally stopping in Escondido. (A Favorite stop of mine)

Click the link twice and a helpful PDF will appear and be ready to take to the store for some serious beer shopping.

The beers to buy for June all came off a recent e-mail list of what is available at one of my local beer buying stops Red Carpet, here in sunny Glendale, CA.

So click the links (may take two clicks depending upon the browser) and either head to Red Carpet if you are in L.A. or go to your store of choice and support craft beer from two gypsy brewers and a beer that has traipsed all over the globe.

Here is your handy May craft beer shopping guide. Just click the link below to see three great choices from light to dark.
May 2012 suggestions

For the start of spring here are some suggestions that start with a Dig, go to Wall Street for a share of beer then head to church for something Big and Bad.

Double click this list……March 2012 then print it out (or memorize it) and demand these beers from your local beer shoppe. Or ask nicely, whichever way you prefer.

September can be too hot for heavy beers and chilly enough to make pilsners too little and nowadays pumpkin beers are hitting the shelves early too.

But I have found three great choices for your next beer shopping excursion….
Sean suggests for September

Click twice and the PDF should appear ready to print out!

Above is the second of three new logos designed for me by Charissa Santos. If you like the look of it, check out her site HERE