I am all for beer socks. We all have enough hop adorned hats and t-shirts. So check out these stylish socks highlighting the ingredients in beer from the Homebrewers Association. 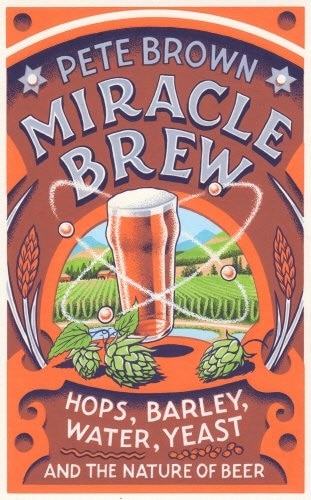 I Kindle’d up this book with a bit of wariness. The weakest part of most beer books is the discussion of ingredients and how-to brew but Pete Brown has done a well-executed deep dive into historical fact and straight up fun facts in his book, Miracle Brew.

Here’s a couple of the fun facts:
“…in French, wine is masculine and beer is feminine.”
“So there’s a cloud of booze at the centre of the galaxy, just hanging in space…”

There are anecdotes about Michael Jackson, yeast banks and old time hop picking summer “vacations” in Kent that really flesh out the main sections of Malt, Water, Hops and Yeast. You learn about each of the ingredients but not in a stuffy way. It feels like a good museum exhibit where you go from one painting to the next with a guide explaining each one.

I was a bit flummoxed by the ending though which had to alternative takes on the Reinheitsgebot. That and a shooting whilst visiting Munich really put a pall on the book that was not there before. Primarily that is due to me and the shooting and bombing that seem to be nearly everyday here in America. But it seemed out of place. A late tie it up with a bow kind of diminishes that downer but not really.

But overall, this book really delivers. Not more so than in the old adage that Brown relays, “We don’t make beer; we simply gather the ingredients in the right place. The yeast makes the beer.” Brown has certainly gathered the ingredients in Miracle Brew.