Do you think you know everything about Lambic beers? You might want to read Lambic by Raf Meert. You will probably have some myths busted.

Don’t let the plain blue cover fool you, this book covers, “The historic origin of lambic had already been lost by the middle of the 19th century. This gave rise to patriotically inspired legends, and recently also marketing-driven stories.

This book aims to deconstruct those fictions, and offers an overview of the historical origin and evolution of lambic beers through painstaking and meticulous research done in various historical archives and documents.

For the first time, the origins of lambic are linked to historical events and their contexts. It provides surprising new insights into where, when and why lambic came into being, North-America’s role in it, and the most original faro, lambic and gueuze and their etymology. This book is a must-read for the lambic enthusiast who is genuinely interested in this unique and world-renowned beer.”

We need to keep our eye on history in order to not repeat mistakes or be able to re-create a tasty beer recipe from years past. Which leads us to this news item…

I am a fan of many things in #independent beer world and one of them is both the reverence and irreverence to old styles. American breweries will add anything and everything to Gose, IPA, Stouts and Saisons. But there is also an undercurrent of bringing back the classics in a more pure form.

So I was excited to see this label from Jester King…

…that is made with noted beer historian Ron Pattinson. Who I hope will make more of these beers with many different breweries across the country. The future is limitless but the past can be mined for good beers too.

Being a regular library user, I would welcome the chance to check out both the physical and on-line collections regarding craft beer.

Dubbed the Brewchive, it “is a new project from the university’s library. According to CSUSM Special Collections and History Librarian Judith Downie, the collection dates back to the late 1980s, about the time that the craft brewing scene first started to gain steam in the San Diego area. Around 30 years ago there were maybe five or six craft breweries in the county; today there are 156.”

Now that L.A. has a nice amount of breweries and a little bit of history behind it, the CalState system might want to look into expanding north and to Central Coast and Bay Area too. It will be much easier to find documents, coasters, recipes and the like 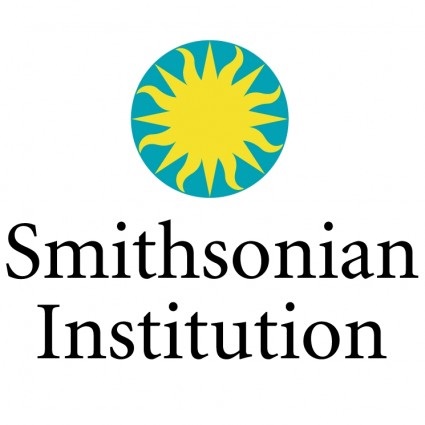 The most appropriate news out of the 2016 Craft Brewers Conference in Philadelphia considering its rich American history is that the Smithsonian’s National Museum of American History will launch a long “three-year initiative to collect, document and preserve the history of brewing, craft brewers and the beer industry to explore how the beverage and brewing connect to larger themes in American history.”

Beer will join the “Smithsonian Food History” project in telling the story of America through what we eat and drink and who made what we eat and drink. Hopefully this will become a vital place of not only museum displays but also for research and educational opportunities. And maybe even a series of historical beers.

Despite my father watching every last WW2 documentary and movie made, I never knew the footnote to history about the HMS Menestheus, a war time floating brewery. 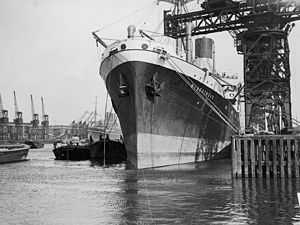 According to the story from Vinepair, “These ships were built at the insistence of Winston Churchill himself and were not only to include breweries, but also cinemas, dance halls and other amenities, which is why they then became known as amenity ships.” What would under the USO banner to us in America.

The full vision was never really fulfilled since, thankfully, the war came to a close but according to the story, “During its time in the Pacific the HMS Menestheus visited the ports of Yokohama, Kure, Shanghai and Hong Kong, brewing a mild ale that was served slightly chilled. Reports from soldiers who consumed it at the time were that the beer was absolutely delicious, especially when compared to what they had been drinking before.”

I know that there are cruises with craft beer themes. I just read about one with the Texas brewery Jester King. But wouldn’t it be great if there were a ship outfitted with a brewery that could ferry paying passengers from port to port and learn about the brewing history (and future) of the ports of call and then brew a beer in that style (or have one at the ready). 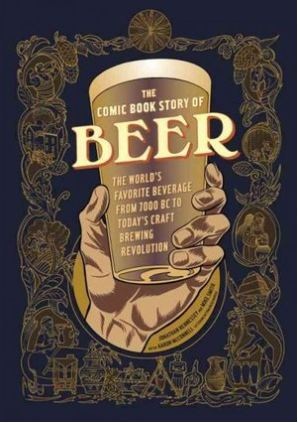 The trio of writer Jonathan Hennessey and illustrator Aaron McConnell with the able assistance of professional brewer Mike Smith have fashioned a new way of looking at the history of beer. The world of comics.

The Comic Book History of Beer goes ALL the way back to the very beginning and using a style that only the comic/graphic novel medium can truly heighten, you get a historical tour with fun facts that isn’t dry and dusty and rooted in biology and chemistry. Instead of “wording” about yeast, you get graphics instead.

Looks to be a fun read.

Due to Santa being of advanced age, I found out via wayward e-mail that I would be getting this book for Christmas; which is tomorrow. 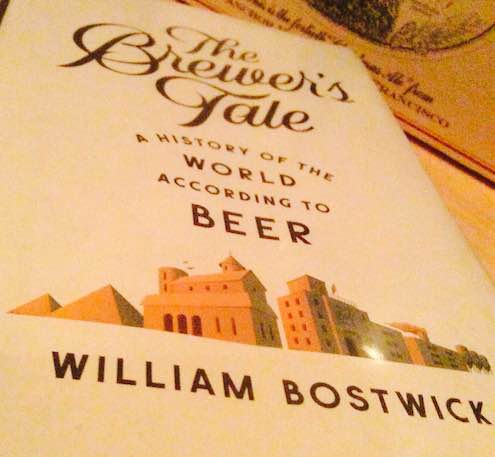 Which means that I got to read it early! And I am glad I did. I have been in a rut of bad books, repetitive books and flat out uninteresting reads. The Brewer’s Tale is none of those things.

It is broken up into eight categories like The Patriot and The Monk to illustrate both a brewing era and an archetype of brewer. You get opinions from Jim Koch and Sam Calagione as well as points of actual view from iconoclasts such as Brian Hunt of Moonlight Brewing. And each chapter gets a home brewed beer that is actually woven into the text very well.

One of my signs that a book has been enjoyed is the amount of dog-eared pages. And there were many in this book. Be it quotes from Martin Luther to the Devil, the names of Elizabethan ales or a quote about the glory of the inefficient hand-made.

William Bostwick has covered a lot of ground, educated me and done so in under 250 pages. It is as if, a trusted writer had synthesized beer history and put it into a slender volume. All while sharing a personal point of view.

Of course there are a couple of things that I would change. Somehow Logsdon Ales ended up in Washington State instead of Hood River, Oregon and the old chestnut about how big beer makes uniform quality beer is there.  But it read more like a having a discussion with a well versed beer buddy where I felt that I could chime in with my opinion as well.

As you can probably tell, I highly recommend this book.  It is up there with Ian Coutt’s book the Perfect Keg for readability and accessibility.

William Bostwick has penned a new book on the evolution of brewing through history. The Brewer’s Tale about “Jumping through time as he weaves ancient lore with today’s craft scene,” 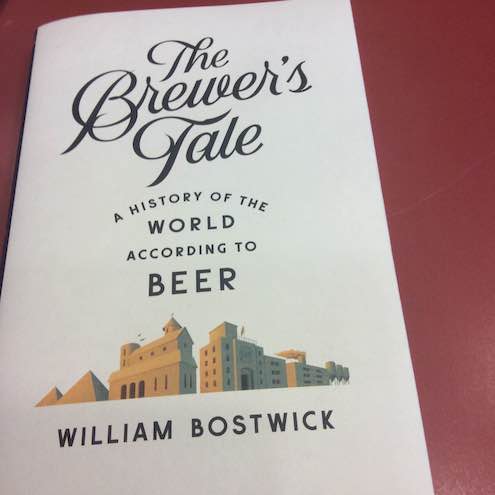 Since Bostwick is a journalist with a Wall Street Journal pedigree, I expect this book to be well researched especially if it wants to cover 5,000 years of beer in 300 pages.

It is on my reading list, so when I have finished, expect a review here.

This month the Pittsburgh Beer Snob is leading the Session and here is the topic for July….

“I love history. There’s just something about it. It’s fun. It’s interesting. It even gives me goosebumps. So, I only saw it to be fitting that I choose the topic of Beer in History.

Even better is the fact that the summer time is the main period of the calendar year that I absolutely delve into history. We just passed the 70th anniversary of the Invasion of Normandy (Many of you know it as D-Day or Operation Overlord). The latter portions of June mark the beginning of the Gettysburg campaign which culminates on July 3. The following date is obviously the Fourth of July here in the states.

At many points in history you can look back and find alcohol intertwined. A lot of times that form of alcohol is beer. Beer is something that connects us with the past, our forefathers as well as some of our ancestors. I want this topic to be a really open-ended one. So, it should be fairly easy to come up with something and participate.”

Beer is embedded into history of all kinds, science with Pasteur, technology with modern behemoth breweries, women in the workforce with ale wives.  Monks aplenty as well.  And now as craft beer reaches 25 and 30 years of age in some breweries, there is a spate of books about how craft came to be.  Recent history, as it were.

But I want to talk about metal.  Not the music. More specifically aluminum.  It is why the industrial water lagers became so ubiquitous and it is also powering a growing trend in craft brewers who put most of their beer in cans. It has bridged two competing interests in history.

This metal was first identified in the 1780’s and took awhile to become used commonly because getting it out of the ground proved hard to do and too costly to do until advancements in the 19th century made aluminum cheaper to be made and easier as well.  Thus the price for it fell and more people could use it.

Even with that change, it wasn’t the metal of choice until after World War II (I know that World War I is chic right now but let’s talk WW2). Steel cans were sometimes used but bottles were the first choice for price and because that is what was used.   A plucky little brewery (Well, it might have been considered that then, but Coors certainly isn’t now)  in 1958, filled little 7oz cans.  The Hawaii Brewing Company used an all-aluminum can  that year as well. The innovation still wasn’t super popular but as the cone-top cans became less popular those who stuck with aluminum through the development process were justified in sticking with it.

R&D wise you then had the steel can with aluminum top.  Then the addition of the pull tab that involved a certain amount of digital dexterity which was better than the church key method of popping open a jagged opening for the beer to come out of.  (Precursor to WIDE mouth openings).  A man with the stylin’ name of Ermal Fraze created the first “zip top” can.  Then Schlitz proudly introduced the first “pop top” can in the year 1963.  Ancient for some beer fans.  But if you remember a world without remote controls or answering machines, you probably remember some cans without that simple and elegant design.

The next step was to create a tab that stayed with the can to avoid a littering of tear off tabs on the ground.  That finally happened in 1975.

And now nearly 100% of all beer and soda cans here in the U.S. are made fully of aluminum. Looking at that summation of hundreds of years it is really amazing to think that a metal found in the ground would become such a monopoly for holding fizzy drinks.  And it is even more amazing that it took craft brewers so long to wrest control of cans back to quality beer.

Makes me want to pop open a Wolf Among Weeds from Golden Road.

Kudos to MadeHow.com for providing the research material.