Batch 1 of Full Malted Jacket spent one year maturing in sturdy American bourbon barrels. Barrel Aged Full Malted Jacket is a Scottish-style “wee heavy” ale. The beer is rich, malty, and brewed with heirloom Scottish barley containing hints of vanilla and toasted oak that meld seamlessly with notes of toffee and caramel. “Full Malted Jacket marks our first barrel aged, bottled brew,” explains Shrago. “The fact that we are barrel aging at Beachwood is an exciting achievement; seeing the potential, we’ll definitely be experimenting further with barrel aged beers in the near future.” 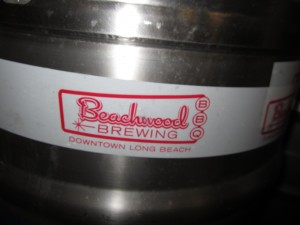 Beachwood BBQ and Brewing is being very helpful to those with aversions to sitting in traffic. Now anywhere you are, they will be too! So help Gabe and Julian celebrate 1 year of brewing at these fine establishments…
July 10 @ Blue Palms
July 11 @ Library Alehouse
July 12 @ Toronado SD
July 14 @ 38 Degrees
July 15 @ Barbara’s at the Brewery
July 17 @ Playground
July 18 @ The Bruery Provisions
July 20 @ City Tavern
July 22 @ Beer Belly

Here is your teaser to what you will be reading in the Brew & You column tomorrow on FoodGPS….
DioNicEss has reached the # 10. And to go along with that momentous landmark, there is a special beer made specifically for the event by Julian at Beachwood Brewing in Long Beach. And I was lucky enough to see and taste System of a Stout before it was finished…. 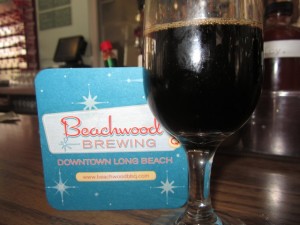 …before the aging with coffee and Armenian brandy are added to the mix.

And guests at the event will walk away with this custom growler…. 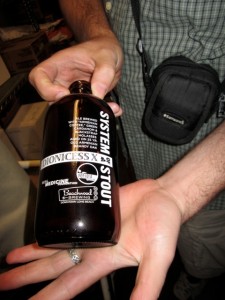 To ensure that you try this beer (Oh and have a spectacular and extreme aged menu crafted at Beachwood BBQ), you will need to buy tickets HERE or grab a rare glass that will escape the brewery at select southland locations.

This will be a night of great beers and great food and I know this because I have been to a couple of these events and Gev keeps topping himself and because I really enjoy Julian’s beers. That + Beachwood food is all the reason you need to snap up one of the remaining tickets. 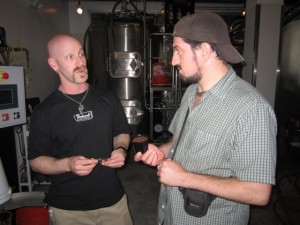