We finish the Caldera Kettle Series with this provocatively named creation…

Another curve ball from Caldera. Was expecting a hop explosion and this is what I got…

This special series eschews the tradtional bigger beers theory and goes light and subtle. Like this Ginger Beer…

This is one of the lightest beers that I have had in a long, long time…..

You can label me a west coast hop junkie if you want but even the most jaded bitter hater has to love this name…. 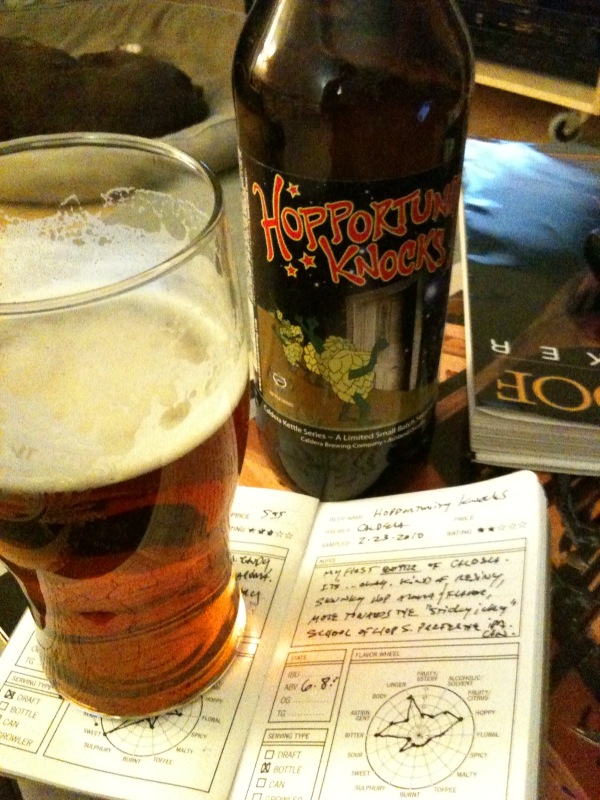 This is part of a series of bottles from renowned can brewers, Caldera from Ashland, Oregon. They also have a Lawnmower beer out and a big dark malty beer is in the works along with an uber smoke beer.

(I love the 33 Beers) Get their tasting book! HERE

…and I am ticked off about it. Siskiyou Brewing in Ashland. They carry Caldera, Rogue and beer from the outback of Central Point, Oregon.

Los Angeles to Portland by car seems foolhardy. You can be at PDX in under 3 hours by plane and be going from brewery to restaurant to brewpub tasting all that you can.

The problem for me is that when I am up there, I see all kinds of bottles that I want to bring home and try at my leisure. And the TSA thinks it is strange to want to bring 5 or 10 bottles of great beer on a plane. So driving it is. And to make the most of it, I decided to stop along the way at the great beer places in California and Oregon.

My first stop was Paso Robles. The home of Firestone-Walker and lead brewer Matthew Brynildson. I chose a stool in the tasting room and ordered a glass of their Bavarian Wheat and Li’l Opal.

The Bavarian Wheat is a lovely hefe. Great clove and banana aroma. It pours a hazy golden with a spicy bite at the end. Very refreshing. It really cools a person down. The Li’l Opal is a saison. Very similar in color to the wheat. Has a sweet, malty aroma as well as a touch of the farmhouse funk. Just a touch sour with yeasty notes to it. Then I asked for a quick tour before I got back on the road. Veronica was kind enough to show me around and halfway through we ran into Matthew and he passed over a sample of their new Imperial IPA, Double Jack. It wa great to try something that hadn’t even been released yet! Just from that taste, I could tell that Double Jack will be a hit with the hop crowd. But I like that the malt was balancing all that bitterness.

I bid adios and headed for San Francisco, and after getting through some typical Bay Area traffic, found myself at 21st Amendment Brewery on a night that the Giants were playing just down the street. I had a glass of the Dahm Kolsch which was a lovely straw color. It is a very crisp beer. No soft edges on it. An uber-pilsner. Then I had the Rathskeller Alt. Not much aroma on it and unfortunately not much flavor either. Little malt sweetness. All of the beers were lower alcohol which is great.

I headed over to ThirstyBear to re-try one of the beers that started me on this journey to beer consultant. The Valencia Wheat. A California wit bier. Alas, it was not as good as the memory of ten years ago. Perhaps, I have had too many great beers since then and this one has faded to middle of the pack.

Then I found by serendipitous chance, the awesome City Beer Store that I will talk about in a separate post because I loved it so much.

The next day it was on to Chico, California. The home of Sierra Nevada. After a couple of wrong turns, I found the huge complex that houses their brewery operations, gift shop and restaurant. I had their new Kellerweis, served in the traditional glassware. It was a hazy orange/yellow color with an aroma more banana than clove with a little sourness at the end. Good Stuff. I also sampled their Southern Hemisphere IPA which was delicious. So delicious that I bought a bottle of it.

Then it was on to Ashland. After walking around the town, I headed for Standing Stone Brewing and ordered up their beer sampler. I received their Cream Ale, Hefeweizen, Amber, Rye, IPA, DIPA and the Oatmeal Stout. My favorites were the Cream ale which was golden and clear with fruit tastes to it and the Oatmeal stout which was a lovely, mild roasted coffee stout.

My last stop before Portland was Eugene, Oregon where I stopped at the McMenamin’s on High Street. I ordered up the Ruby Ale. My sister-in-law’s favorite beer and thanked the gods that the driving was close to the end. I also tried the Jalapeno Wheat. I could not even finish it. I am a pepper wuss and this was peppery.