I hope you are on the lookout for Fool’s today. Lot’s of social media hijinks will be afoot. Maybe even some Russian ones. So break out an RIS and find the funniest April Fool / Easter memes.

~ e-visits to three breweries from flyover country.
~ special featured reviews of new canned beers.
~ Heads-Up on Los Angeles Beer Events
~ Three suggested beers to buy this month. One light, one medium and one dark
~ A Book & A Beer reads Legacy of Spies from John Le Carre
~ I will tap the Firkin and give my no holds barred opinion on the craft beer world.

I have a pair of early April Fool’s suggestion. Granted they will most certainly infuriate Whale Hunters but they REALLY need their protective bubble burst.

#1
I need a brewery to create a mock-up of a label for cans of a new hazy IPA. No need to brew one. Then tweet out a thanks to all the customers who came in to buy cans earlier in the day with a photo of said can.

I will sit in the tap room as people roll in and pretend to finish off the last can with empties at my table for added effect. Anyone who comes up to me and asks for a can will get a coupon for a $1 off an experimental hopless amber ale or a sticker that says that they are an April Fool.

I say this after reading this ARTICLE in the NY Times from Joshua Bernstein about waiting in line for can releases.

#2
My second April Fool’s idea is to heavily promote an IPA can release for 4/1 and then at the last minute say that the IPA didn’t meet rigorous standards but that there will be cans of an Abbey Single on sale.

Just to see who stays in line and which are paid line dudes (yes, it is almost always “dudes”) and, of course, to see who gets the joke. 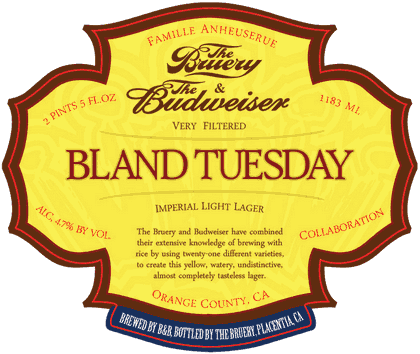