It is not often that I am jazzed about the food options at a brewery in Los Angeles. It is usually not about food quality either. It is mostly that I pick a weekend destination based on the beer. So I end up with whomever is there when I am.

All preamble to the exciting news that APL BBQ from noted chef Adam Perry Lang will be on hand each weekend at Strand Brewing in Torrance from Father’s Day weekend until September.

In the holy trinity of food that pairs with beer, pizza, tacos and BBQ would be my choices and to get the buzzworthy BBQ is an added inducement to head to Torrance.

I follow the intersection of food and beer a lot. Usually it is the beer dinner that is at the fore. But I believe that beer and food will have really made it when dive bars to fancy James Beard-y restaurants have three to four taps of local #independent beers on tap. As cities like Portland and Denver do to name just two.

But then I saw this… 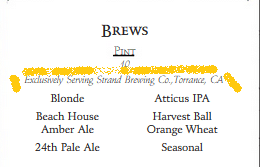 The restaurant is an anticipated steak house in Hollywood, APL. The photos I saw of the interior are classy AF. So seeing that they have a single beer supplier and it is Strand Brewing from Torrance is super cool.

L.A. beer needs to continue to embed themselves in restaurants.