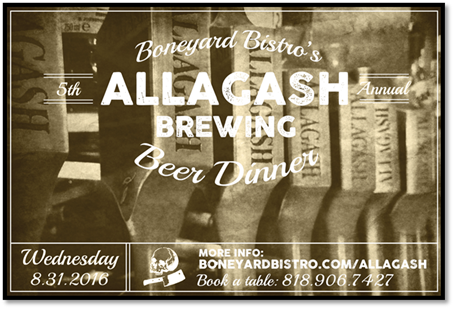 Sometimes you need an extra push to commit to a beer dinner. So, in that vein, check out this Boneyard Bistro menu and the Allagash beers that they are pairing with it….(One big plus is that you have some choice in this matter) 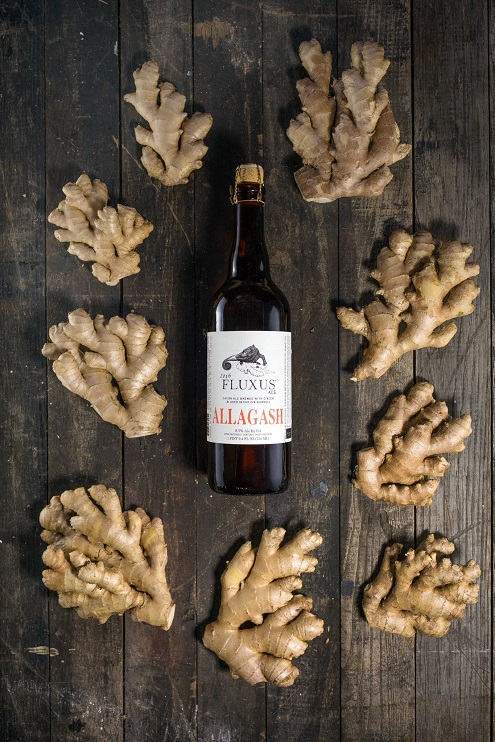 The annual release of Fluxus from Allagash Brewing had sorta fallen off the radar with the influx of new beers from outside the state but an added ingredient and different barrel-aging has it back on the to-buy list when I see it on shelves. (which should be any day now.)

The 2016 version is a saison that is “brewed with a plethora of Allagash base malt, including barley, rye, and wheat. After a heathy dosing of Noble hops, and ginger root,

There are not enough gin and tequila aged beers out there and even less that start with a Saison. The question is how strong will that ginger be? 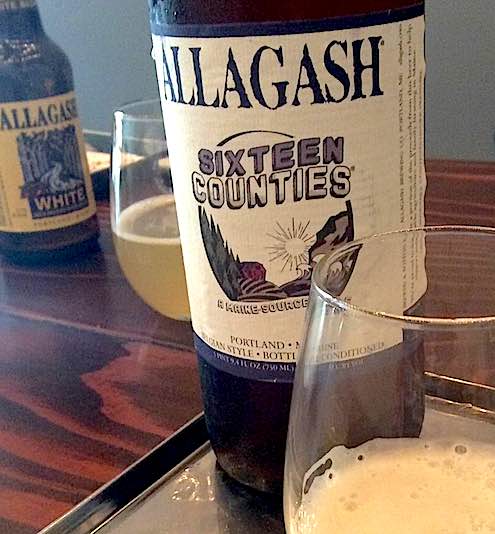 When Allagash comes a callin’ with a new beer, any beer blogger worth their salt will want to taste it. Such was the case when I got an invite to taste the new Little Brett from the Maine brewery at the cheese shop / deli, Milkfarm in Eagle Rock.

L.A. rep Hallie Beaune led me through a tasting of favorites forgotten as well as one of my favorite beers that just was re-released in our beer market. But let’s start with the star of the show.

Little Brett was started on the Allagash pilot system and the beer evolved from where it began. Utilizing Allagash house 2 row malt and their own version of brettanomyces. All the while managing to be at 4.8% abv. And be a complex beer and not watery. The initial aroma is Mosaic hop which transitions to some cool tropical fruit notes before the not so little Brett makes its appearance. It is very Brett at the end finishing with leather and barnyard notes. As with the other beers in the flight, the a uniform dryness completed the picture.

The taster flight started with the beer that made the brewery, White. I haven’t had that beer in soooo long and it was almost new to me. It was much more Belgian-style yeast driven. Very dry and I was reminded to swirl the glass to get the sediment moving and give the cloudy effect. Nancy, their yearly cherry beer was as awesome as I remembered. Just a blast of pie cherry flavor with a restrained sour/tart tang to it. If I had to pick a cherry beer to give to someone as a template, this would be it. Curieux was as good as always and I learned that a gin barrel beer had been made at the brewery. If it is as good as this Jim Beam barrel classic, it will be awesome to find.

Lastly, I had my first taste of Sixteen Counties, their Belgian Pale which has a Maine Grain malt bill and a slight touch of hops. I really enjoyed it. All of the beers had a simplicity to them. No gimmicks. Just a dogged point of view. You could really tell that these beers came from the same brewery.

By the way the Cheese of the day was Alpha Tolman. Milkfarm has a small selection of wine and beer to choose from with some pricey corkage but according to Beaune the sandwiches are great. So grab a beer and a sandwich and enjoy in the Cali sunshine. 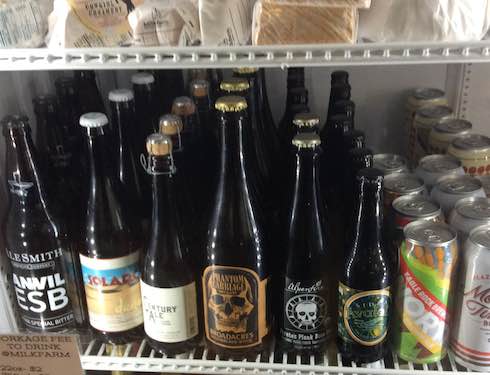 Utilizing a malt blend from Buck Farms in Mapleton, Maine plus caramel malt, biscuit, and brown malt. If you guessed that the hops are local, then you win as Aroostook hops from Westfield, Maine are part of the bitter blend.

Has spring sprung? Hard to tell in Los Angeles where the sun is always in the sky. Even when it is raining. But here are three fruit tinged beers with enough alcohol heft to make them good selections for cool and windy days.

~LIGHT
Almanac/ Apricot de Brettaville 6.50% ABV
For this special release, we set out with the goal of making a beer where every ingredient and process contributed to one ambition: creating layers of apricot flavor. The natural flavors of the brett yeast create tropical and stone fruit flavors in the barrel, which we matched with a small mountain of San Joaquin Valley apricots and finish with a delicate dry hop of aromatic hops. The result is every aspect of the beer, from the yeast, to the fruit to the hops add apricot flavor and aroma – resulting in a delicious wild ale.

~MEDIUM
King Harbor/ Coconut IPA 6.70% ABV
If a tropical beach vacation could be captured in a beer, this would be it. the pineapple, mango, and citrus hop character of our flagship IPA blended with lightly toasted coconut creates a tropical party on your palate. Go ahead, drink it out of a coconut with a mini umbrealla. We won’t judge you.

~DARK
Allagash/ Evora 9.00% ABV
“Evora is a golden hued beer, brewed with a 2-Row and Maris Otter malt blend. It was hopped with Northern Brewer, Mt Hood and Sorachi Ace hops. The primary fermentation used a classic Belgian yeast strain. The beer was then aged for 16 months in Portuguese Brandy barrels with Brettanomyces. The finished beer exhibits notes of honey and stone fruit in the aroma. Citrus and oak dominate the flavor giving way to hints of bread crust. Evora is medium bodied with a fruity, dry finish.” 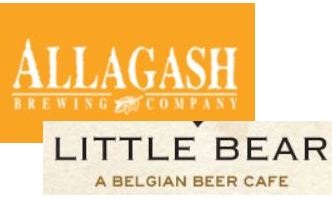 It might be counterintuitive to be sour or wild over a meal of thanks but when you pair Allagash Brewing wild and sour ales with the food of Little Bear in the Arts District, it makes sense.

This dynamic duo are throwing a “Friendsgiving” dinner on Thursday, November 19th which features rare Allagash beer flights, and here is the real extra friendly part, a portion of proceeds will benefit the Downtown Women’s Center.

No tickets are needed for what they are calling an “intimate, family-style meal to share good times and for a good cause” with Interlude, Midnight Brett, Little Brett and Confluence on offer. 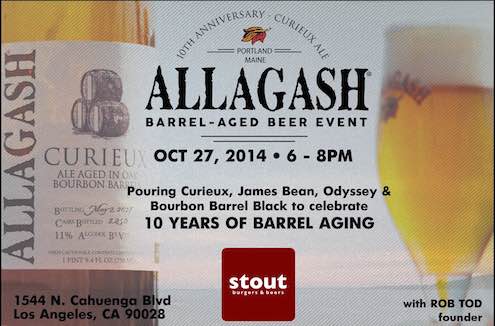 In advance of that party, I e-mailed a few questions to brewmaster Jason Perkins about their signature and first barrel beer and aging in general:

1. Has Curieux changed much in its ten years of being brewed?
The beer really has not changed at all, in terms of recipe and process. We did add better temperature control of the barrel room about 8 years ago, which just helped to control the over oxidation of the beer. As it is a barrel aged beer, and there are inevitable variations from barrel to barrel, the beer is always slightly different batch to batch. We control this as much as we can through blending, but each batch is its own “vintage”. As we have developed our relationship with Jim Beam over the years, we have been also been able to specify the exact barrels we want and have been able to get them fresher and fresher. This has only improved the beer.

2. What have you learned about blending aged beers from doing Curieux?
Blending (like brewing) is a constant learning process. We are always learning new things, especially as we try new beers. Probably the most Curieux specific thing we learned very early in the process, is that this specific beer really open up and becomes more complex with 15-20% un-oaked Tripel blended in. Common sense would make one think that adding un-oaked beer would dilute the oak and bourbon notes, but we actually find that it compliments them, without diluting the beer.

3. Does blending get easier to do or is finding a balance still hard to accomplish?
I suppose the only thing that has made it easier, is having more staff who are competent at it. In the early years, it was myself, Rob and maybe one other person. We now have several of our Senior Brewers and QC folks who are able to blend this beer. This makes it more practical, while bringing more minds to the table.

4. Are there different consumer preferences on the East Coast vs. West Coast?
I don’t think so, not that I have seen. Although California sure does drink a lot of Curieux!!

5. Will there be a crossover in the Coolship and barrel aging programs?
The Coolship beers are, of course, barrel aged as well. As are many other of our Wild and sour beers. We house all of these barrels and foudres in a different building, adjacent to the brewery. There are some obvious similarities between the Non-wild and wild barrels, but what we are asking of the barrels is very different in each of those two areas. We do cycle some of our non-wild barrels into use in the wild barrel area, but never the other way around.

The only blending we have done of wild beer with non-wild beer, was a recent beer called Belfius-which is a delicious blend of a single Coolship barrel and our Saison. We only sold that at the brewery.

Allagash has been involved in many a beer dinner that I have heard about so it comes as no surprise that they have a cookbook now. 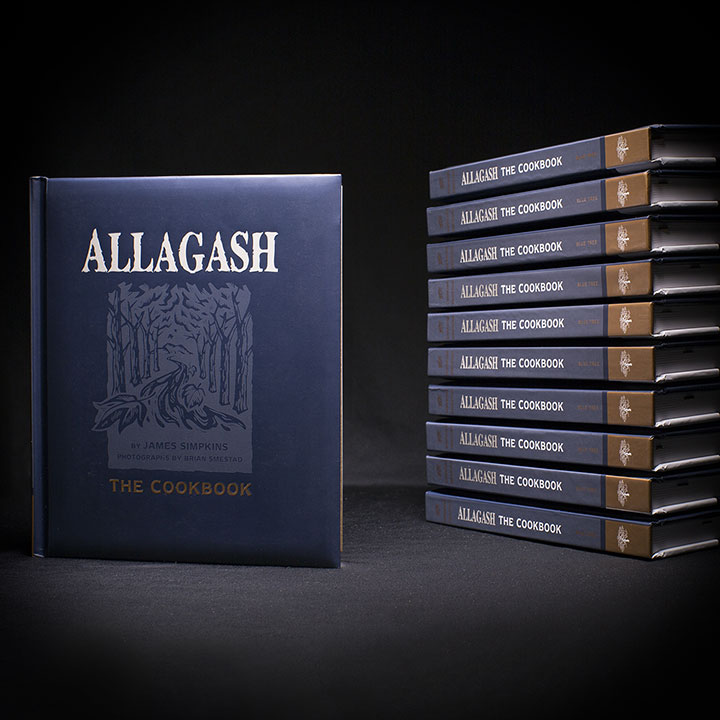 Here’s the video to tell you more…..

Makes me wish that I was a better cook.

New Belgium and Allagash have collaborated on one beer with what appears to be wildly different main ingredients. 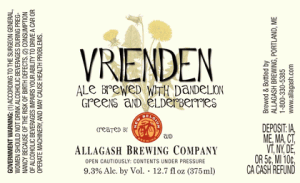 Check out this cool video that they put together…