The next time that you go beer shopping (safely of course). Do not let yourself get seduced by the rows of 16oz cans. Make a game out of finding beers in a 12oz format or plan to only buy bottles.

I say this to make sure we all keep our beer buying open to everything. Cans do many beers better favors than bottles but there are beers that are just as good in bombers or 25.4oz big bottles.

I think this is so cool that I had to give credit to the original Tweeter. Yeah, there are rules but I think that a lot of bottles fit the bill and this really makes a difference. Kudos to Bayern Brewing!

Maybe some of my bellyaching (literal and figurative) has been heard.

From then next beer on (Bravo, by the way), the Firestone Walker Vintage Reserve barrel-aged beers will be packaged up in 12oz and not 22oz bottles.

That includes the later in the year Anniversary XX1. Considering that many finer beer shoppes allow singles sales, that means more people can taste the beer at a lower price point. Or cellar hoarders can buy more and have better tasting parties down the road. However you slice it, it is a much more manageable portion of a big beer that deserves a small snifter.

Back to Bravo though…. 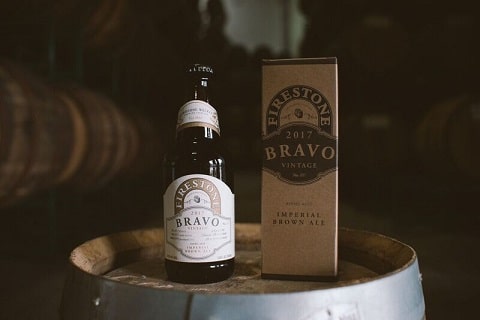 The Firestone folks describe Bravo which “has remained one of the driest beers in Firestone Walker’s Vintage Reserve series of barrel-aged beers, and since day one has been considered a vital component in the annual blending of the Anniversary Ale, balancing out some of the stickier components.”