What is lost is found is the monthly topic for The Session, this month hosted by Tale of Ale.

Lost, or almost lost, beer styles. There are many of them that have started to come back in to fashion since in the last 10 years due to the rise of craft beer around the world.

If you have a local beer style that died out and is starting to appear again then please let the world know. Not everyone will so just write about any that you have experienced. Some of the recent style resurrections I have come across in Ireland are Kentucky Common, Grodziskie, Gose and some others. Perhaps it’s a beer you have only come across in homebrew circles and is not even made commercially.

There are no restrictions other than the beer being an obscure style you don’t find in very many places. The format, I leave up to individuals. It could be a historical analysis or just a simple beer review.

When I think of lost beer styles, after a weird side trip to the Dharma Initiative beer from the TV show Lost, I think less of gone forever and more of the history of the here and now. The more that I read, the more that I see that beer styles have always been evolving. Just trying to chart the rise and fall and changes of a porter is difficult. Which means, to a certain extent, many more beer styles have died out then are really counted. An 1890 porter was not the same beast as a 1940 version. And you would be hard pressed to find a proper pint of either in 2015.

From there, my synapses started firing in a new direction. Not towards gratzers and gose’s and overall style categories but towards beers that have the same name but are very much different from their 1st, 2nd or 3rd incarnations. Case in point. Golden Road Brewery is known for their hoppy offerings such as Better Weather or Wolf Among Weeds or Point the Way IPA’s. But the brewmaster at the founding of the brewery is no longer there. So Point the Way 1.0 is long gone. Quite possibly never to return again. Though it is technically not lost because the recipe is probably on a hard drive somewhere.

I know what your saying. In digging deeper than individual styles am I not seeing the forest because of all the saplings in my way? Quite possibly. On the smaller brewery levels, each batch may have quirks to the point where they are noticeably separate from the batch before or batch after. On an agricultural level, the hops and malts and adjuncts may be variable as well and that is only the known unknowns. But that is not what I am heading towards.

Gose from Goslar and Gose from Leipzig and American Gose interpretations are on a linear timeline. With each major stylistic departure noted. But an honest American interpretation of Gose with no crazy fruit or flower additions, would it be recognized as Gose? A rough approximation of the style would be there but the natural evolutionary drift away from the first batch would probably be considerable.

Not to block someone from attempting a historical beer resurrection, but an authentic California Steam beer would be hard to re-create too and that is in the not so distant past. A Goslar Gose would be a big task primarily because no one from that era could verify it’s accuracy.

Nowadays with information a mouse click away, a future brewer could possibly both have the recipe and the tasting notes to accomplish a task like this. Making a 2015 version of Golden Road 2020 IPA in the year 2030.

With all that in mind, I say let the lost be lost. Let’s keep evolving. 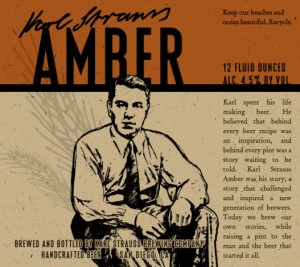 “Karl M. Strauss would have celebrated his 100th birthday on October 5th and Karl Strauss Brewing Company is honoring San Diego’s Godfather of Beer with the re-release of his namesake and favorite—Karl Strauss Amber. Karl sparked the craft beer renaissance in San Diego back in 1989 when he helped two gutsy kids open the city’s first craft brewery in more than 50 years.

He was born in a brewery in Minden, Germany, studied brewing at Weihenstephan University, worked for Pabst for 44 years, but is most remembered for his unwavering commitment to quality that helped lay a foundation for San Diego as a leading craft beer destination. To pay homage to the man who wrote the recipe and inspired a local craft beer movement, the company redesigned the Amber packaging featuring a hand-sketched image of Karl from his younger days.”

I am kind of amazed that they didn’t do this earlier then do an imperialized version for the 100th. But an honor is an honor.