The statistical arm of the Brewer’s Association put up a handy set of graphics for each state that gives a snapshot of brewing activity in the state. 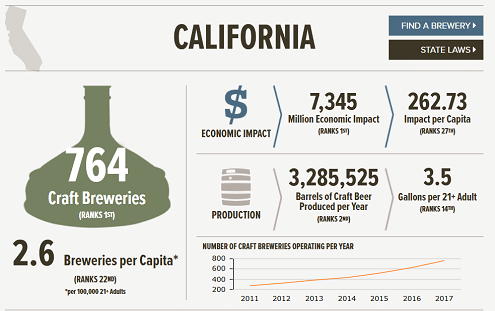 This time around, I want to point out the rankings that are in smaller print underneath the headline numbers. And what I want to specifically call to attention are the per Capita numbers. California has the most breweries in the Union but factoring in our large population we fall to middle of the pack at 22nd. Same with economic impact, we fall from 1st to 27th.

Those aren’t to be read as negative because, we may have a higher proportion of tiny breweries. And ranking higher in per Capita breweries might strain the infrastructure and lead to unhealthy amounts of competition.

The last important number is that economic impact. If that continues to grow, even if the other numbers do not, then the clout that our brewer’s guilds can wield will grow.