How about we head to the brewing mecca known as Idaho. I know that it is not well-known now. But it just might be in a few years. It has all the ingredients, literally.

In the meantime, lets take a quick peek at Sockeye Brewing in Boise. 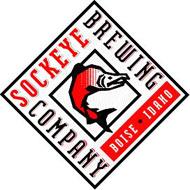 They have an impressive selection of American IPA’s with great names including Widowmaker, Hopnoxious, Dagger Falls. But they have a beer list of over 20 beers from their regular line-up (Galena Golden Ale) to seasonals (Socktoberfest).

The brewers are Josh King & Lance Chavez. They craft each brew on site in small batches.