For the momentous 90th Session, it is time for Beer Fight Club.  Topic courtesy of Hipster Brewfus. And though it pre-supposes that there is too much ass-kissery in beer blogs, I do think the challenge is a strong one.

The groundrules: “The idea for this session stemmed from a couple of few places. The first being my first experience with a bottle of Stone Brewing Vertical Epic 11-11-11. I have never wanted to punch a beer so hard in its glassy face before. The second item is my growing frustration with the general acceptance that all craft beer is good beer, and that any hint of negativity will do damage to our burgeoning scene. Lastly, a lot of the topics on The Session lately have been pretty unimaginative, uninspired, and uninteresting.

The premise is this: Have you ever drank a beer that became a battle, more than an enjoyable experience? Maybe a beer that was far bigger than you had anticipated? Something you felt determined to drink, just so you can say you conquered that son of a bitch, and you are all that is powerful. Or perhaps it is something that is just so bad, all you want to do is slap it around a bit. Or maybe you were on the verge of passing out, but you just wanted that one last beer, and the valiant struggle between taste bud fulfillment and the velvety embrace of sleep that ensued.

It’s time put down whatever praise you were about to dole out, and serve up a nice can of ass whupping.”

This is so not a gose. Smells of salad dressing. no salt or coriander to be found. it’s a cloudy yellow. still hard to get past the smell. mostly savory in flavor with small bits of lemon. just not good to me.

You may be surprised at which brewery created this type of reaction.  And it explains why I struggled against this beer and took far too many (and increasingly tentative) sips when I should have chucked the offending glass at the wall.  Even though it wasn’t the fault of the glass, so I should have poured the remaining 3/4 down the nearest and dankest drain I could find.  And then got something better to fill that poor glass with. 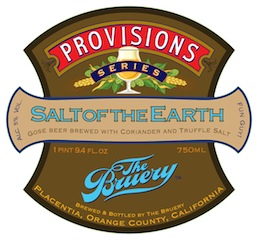 Yup, The Bruery.  Maker of an ever expanding list of really great beers.  Or is that too positive for this challenge?

Back to point.  This No-Gose was served at a Bruery event.  With Bruery people there.  And it was one of the first beers that, when asked by a Bruery-man, I had to say was bad.  There was no way around the grimace on my face and the nearly full glass that was sitting on the table conspicuously not being enjoyed.  It was slick and viscous and the taste wouldn’t leave my mouth.  I struggled to find the coriander through the stink of the truffle oil and came up empty.

This was a beer that was so bad that is a permanent marker of the bottom half of the beer rating spectrum for me.  “Well, at least it wasn’t that slimy, salty beer.”  Looking back, I wish I could have phrased things better because I certainly didn’t want the Bruery to stop experimenting.  (Sorry, too positive again) But I just couldn’t believe that this had actually passed by many people’s lips and was deemed tap worthy. It had shocked me out of my normal practice of politely asking questions about the philosophy behind the beer which I think is more enlightening than just slagging the beer or brewer.  (Oops, I am such a Pollyanna).  After that I explain what flavors or aromas that I didn’t like or loathed or didn’t mix with my palate. Which in this case was everything.

I have encountered no other beers with truffle oils in the intervening 3+ years and if I saw one, I would probably run screaming from whatever establishment I was in or I would put crime scene tape on the bottle.