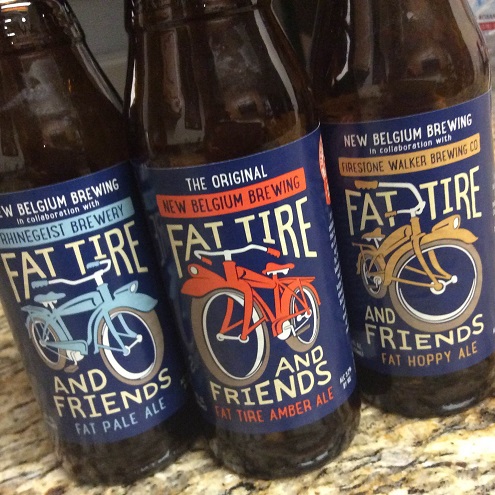 For round one of the Fat Tire & Friends Riff Pack, I separated out the hoppy + the one and only Fat Tire from the wild and sour group (which will be post two). This will test my reviewing because is the goal for the beer to be connected by a flavor profile or color or ABV to the original? Or do I review simply based on which tastes best?

Let’s get down to it and see….

1. Original Fat Tire
I have not had this beer in a long, long time but I sorta know what to expect. There is a little alcohol on the nose followed by a touch of honey sweetness that is balanced by carbonation. The grain flavor kicks in at the tail end but there is not much else here. Plain, simple and unadorned. Super tasty on a hot day in Los Angeles.

2. Collaboration Fat Pale Ale with Rhinegeist
This is a Belgian XPA according to the label. Pours really close to the same color as the OG. It manages the feat of starting out mimicking the Fat Tire before taking that Belgian turn. Banana and clove notes are prominent. Bitter but that is the lingering and not the main focus here. Fat Tire gets Hefe’d to me.

3. Collaboration Fat Hoppy Ale with Firestone Walker
Fat Hoppy Ale is a serious departure from the amber. Starting with the medium yellow color. Then the big difference hits. This is really hop forward. Grassy and fruity and really juicy with a touch of spice too. This is a wonderful session IPA/ Pale Ale but not really redolent of Fat Tire much. A killer hop combo for sure. I am digging this one.

On the which tastes best scale, with three beers yet to taste, I have to go with the Fat Hoppy but in the category of connection to Fat Tire, the Rhinegeist is the clear winner.