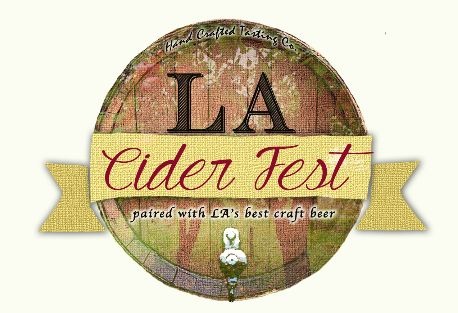 Cider is not my area of expertise other than I know what I like. So when I had a chance to e-mail a few questions to Mark McTavish of Half Pint Ciders and the force behind L.A. Cider Fest that I will be attending next month, (Get your tickets HERE) I quickly fired off a few questions to him. Now I and by extension, you, can learn more about apples.

1. What is the difference between American, English and French ciders? Or are they essentially the same?

American cider is all over the map! It’s sad to see all of the sugar bombs that still dominate the shelves in the US, especially considering that America has one of the richest cider traditions in the world. Our fore fathers have likely been rolling over in their graves for the last few decades, Americans have more or less ruined the name of “cider” – thanks to macrobeer brands like Anheuser-Busch and Miller Coors. The last decade has been promising, as many real cider makers have emerged. Farm based growers have been using proper cider apples to produce dry and complex ciders that would rival any of their European counterparts. The greatest contribution that the US has made is of course the establishment of “craft cider”. Leave it to us Americans to innovate, experiment, and create a whole new world of cider.

Now let’s consider European ciders from Spain, England, and France. These cider making traditions are different from one another in many respects, they do share one important trait – these traditional old world ciders are typically fermented with naturally occurring yeast that can be found on the fruit itself, on the milling and pressing equipment, and inside the fermentation vessels. This type of fermentation, referred to as wild or spontaneous fermentation, results in a markedly different flavor profile than cider made with yeasts that have been cultured in a laboratory.

For craft beer drinkers, Spanish ciders made in Asturias and the Basque country are a likely favorite. Sour beer lovers in particular will find much to like in these racy, acidic libations. Traditional “sidra natural” is packaged in a 700ml green bottle with a visible layer of sediment resting at the bottom. Unwary drinkers often try sidra natural and immediately turn up their noses. But when poured correctly—from as far above the glass as you dare and just a mouthful or two at a time—the vinegar vanishes and a refreshing cider emerges. Typical alcohol content is six to eight percent alcohol by volume.

To satisfy a sweet tooth that craves some complexity, look to the French – specifically ciders made in Normandy and Brittany. Most cider makers in France use a technique called keeving that arrests the fermentation process before the yeast can convert all the natural sugars to alcohol. These sparkling ciders are packaged in strong glass bottles topped with a cork and cage. Ciders labeled as brut are the driest, but will almost always be sweeter than dry ciders from other cider making regions. French ciders labeled as demi-sec or doux will be sweeter still. Typical alcohol content is three to five percent alcohol by volume.

For some dryness and more austerity, venture into the world of English ciders. As with French ciders, most English ciders use tannic apple varieties known as bittersweets and bittersharps that contribute a pleasant astringency and bitterness to the finished cider. The dominant aroma and flavor notes are often spice, smoke or, in some cases, barnyard. The mouthfeel will be similar to that of red wine and many bottled English ciders are still, but modest carbonation is also common. Since English ciders are fermented more fully than French ciders, the typical alcohol content will be higher, sitting somewhere between seven and nine percent alcohol by volume.

2. How do you feel about ciders with hops in them?

Hopped ciders have been a popular style as of late, and rightfully so. I particularly like the citrus and floral character from such hops as Citra and Amarillo, they are a wonderful compliment to the tart acidity of a natural dry cider. What I find most appealing about hopped ciders is that they are dry hopped (as opposed to brewed with heat), pulling out only the beautiful aromatics and none of the heavy hitting bitter oils. If you want to love IPA but find it too bitter, try a hopped cider!

3. What is the # 1 piece of knowledge about ciders that people should have?

Cider is not just a beverage, it is a beverage category. No different than beer, or wine. Most assume that all ciders are sweet and bubbly, low grade apple soda with alcohol. This could not be further from the truth. Real cider is dry and often still, far different from the industrial ciders made by macrobeer brands here in the US. Let’s also consider beer, which is made in just weeks and at any time of the year. Cider is actually wine by definition…..apple wine to be exact. It takes several months to ferment and age a quality cider, and is typically made just once each year at harvest time.

4. What is the cider maker equivalent of Anchor or Sierra Nevada?

Hard to label any of the current American craft cider brands as the equivalent to highly successful craft beer brands like Anchor or Sierra Nevada, we have yet to identify a cider industry leader that could rival a game changer like Ken Grossman. The craft cider boom has really only been happening for the last 5 years or so, on a national scale anyway. The growth is absolutely mind blowing, and happening at a much faster rate than craft beer ever experienced. It is inevitable that visionaries and leaders will emerge, I have a few in mind that I respect for their contributions to the craft cider industry…….Nat West @ Reverend Nat’s, James Kohn & Nick Gunn @ Wandering Aengus, Kristen Jordan @ Sea Cider, and a large group of incredible California cider brands who are making an impact now. West coast is leading the charge!