Thanks to a windfall of breweries distributing in L.A., instead of bemoaning when a new beer was released (but nowhere near me), I now get to buy it. Which means that I can pick up a can of Bell’s Brewery newest addition, Quinannan Falls Special Lager Beer when it arrives in June.

Here is part of the backstory- “Quinannan Falls” pronounced “҆Kwi-ni-naan,” or Q-Falls as it affectionately known at Bell’s pub, has been an Eccentric Café favorite since 2009.”

And the beer description – “The end result is a dry-hopped lager that possesses a crisp, dry bitterness you would expect from a German pilsner, but the use of highly aromatic Simcoe hops from the Pacific Northwest, evoke the fragrant pine forests that inspired this beer.” 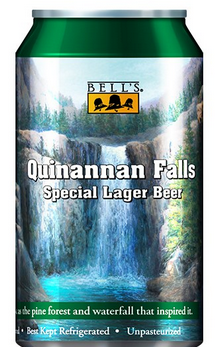