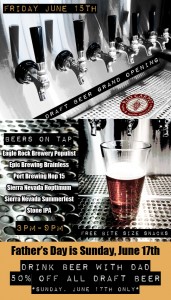 Red Carpet in my adopted hometown of Glendale is making the jump from bottle shop (with wine and spirits) to adding some tap lines too! “We are unveiling our new draft system. We only have 6 beers on tap. Still working on getting more. We will be officially pouring starting at 2PM Friday June 15, 2012.”