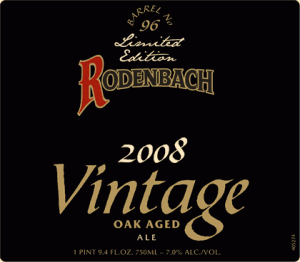 “Vintage 2008 was aged in oak vat number 96 at Brouwerij RODENBACH in Roeselare, Belgium for the last two years. The 750 ml bottles are cork topped and the Flanders sour ale resembles an Oloroso sherry wine with its deep red, coppery glow. Cask 96 was chosen for this year’s special Vintage because its track record in producing sour beer over the years has been superior.”

“Vintage 2008 is 7% ABV and is more mild than RODENBACH Grand Cru. Like other good sour beers, RODENBACH Vintage pairs perfectly with food because of the absence of hop bitterness. Vintage 2007 took home the Silver award in the Wood and Barrel Aged Sour category at this year’s World Beer Cup in Chicago.”