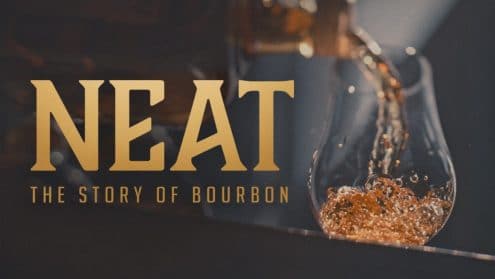 One of the benefits of having streaming services so hungry for content is that you can see documentaries that cover the spectrum of topics. Competitive baristas or a quick history of, say, Bourbon.

Neat – A History of Bourbon is beautifully shot. Stuffed to almost the breaking point with images of Bourbon being splashed into glasses. The film covers major points in Bourbon history such as the Bonded Act and Congress enshrining the drink as only Made in America followed by the creation of single barrel and small batch bourbons. Summarized a bit too much but still clearly expressed.

But the true heart of the story are two people who needed much more screen time, Freddie Johnson and Marianne Barnes. Johnson who is a third generation employee as a tour guide tour guide for Buffalo Trace speaks very eloquently especially about his father and relationships. Very touching stuff. Barnes is the master distiller for a new (as of filming) distillery, Castle & Key—a new Kentucky distillery. She is the first female master distiller in Kentucky since Prohibition and I would love to have heard more about her journey in Bourbon.

Beware, you will want some Bourbon on hand and you may want to make an Old Fashioned at the end.