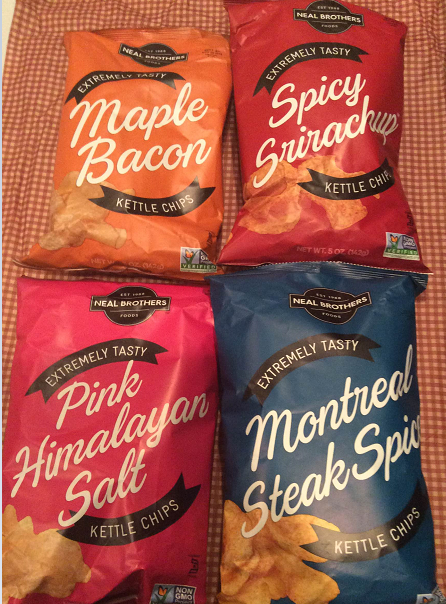 In the mail came a box filled with (4) bags of potato chips. No, I am not a member of a Chip of the Month club, I was contacted by the PR arm of Neal Brothers Foods to pair craft beer with boldly flavored chips.

All four flavors are big. Even the “plain” salted is not just any salt. So I did not want to pair beers with equally vivid notes. Instead, taking my learning from recent beer pairing demonstrations, I went for beers that would play with certain ingredients and not the entire flavor profile. Strong enough to dance but not leading. I opened the two beers watched some football and taste tested.

Let’s dive in….
Starting with maple bacon flavor which has the maple part down. The bacon part is missing though. These are sweet chips. No salt presence to me. I paired it with Bee Line Honey Blonde from Track 7 Brewing. The goal was that the honey from the beer would mirror the maple syrup notes. What worked was that the dryness of the beer brought the sweet down nicely but the chips brought out a more mineral taste in the beer.

Next was the pink Himalayan salt bag, in the helpful pink bag. Not much salt going on here. If you had handed me a chip without showing me the bag, I would have said unsalted kettle chips. Boring but get the job done. The Bee Line added some character to the chip. The beer lost the mineral notes and became a better drinking with this chip.

For the boldest flavors, I opened up Sierra Nevada Oktoberfest. I wanted something bigger but without a distracting flavor. The first chip up was Montreal steak spice. This flavor betrays their Canadian heritage. And when first opened, the aroma burst out. Dill hit me first. Then dill hit me second. Then a smack of pepper. After two tame chips, this one really struck me. The Chico brewed beer held its own though. Decreasing the spice and adding a viscosity.

Before I delve into the last bag. The spicy Srirachup chips were the ones that I dreaded. Not a big fan of heat, am I. Just a touch is all I need. And by a touch, I mean parts per million small. But I told my fear to go away and grabbed a chip. A cross between sweet ketchup and Sriracha. Oddly, it was not the chip that I could eat the most of but I think it was the most well crafted flavor. Too spicy for me but not nearly as scary as I expected. It was well balanced and matched the description on the bag. The Oktoberfest served to add bread-iness that balanced the spice and sweet.

None of the chips blew my mind but it was illuminating to see how the beers helped the chips and vice-verse. I think I am on the right track of pairing beers that are not as splashy but I am thinking about cracking open an IPA and seeing how that works.