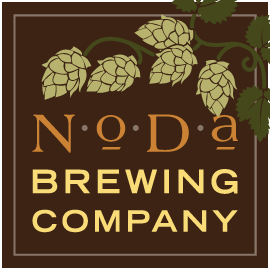 And NoDa is a perfect fit because of one beer: Jam Session. “The evolution of American Pale Ale—still a session beer but it sacrifices nothing—clear hop flavor shines through without being too dominant, and there’s a great malt flavor uncommon to the variety. The backbone of this beer is the balance of imported Maris Otter and Caramunich malts with the pine and citrus flavors of Centennial, Simcoe, and Citra hops.”

And here are the other brews to taste while watching the Hornets:

Hop, Drop ‘n Roll – “2014 World Beer Cup® Gold Award Winner, American-Style IPA. Hops in your face. Crisp, mouthwatering, American citrus hops dominate for an ideal IPA character. It’s hopped before, during and after the boil with late boil additions of Citra and Amarillo for a complex flavor profile. The rich golden color comes from a blend of English and American base malts accented with substantial amounts of Vienna and Wheat malt. This is the beer that started it all for NoDa Brewing.”

Midnight Madness – “This is our version of a Cascadian Dark Ale, more commonly known as a Black IPA. Made with six hop varieties: Cascade, Centennial, Columbus (Tomahawk), Chinook, Simcoe, and Warrior it has a nimble complexity surprising for it’s style. Sweet malt notes linger in the finish and despite its opacity it’s fairly medium-bodied and smooth.”