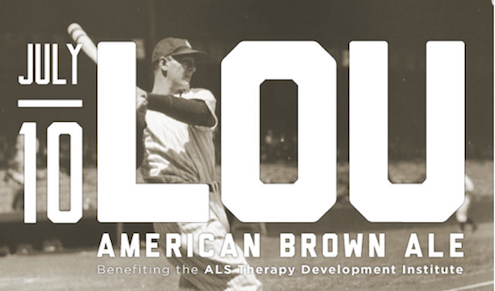 Eagle Rock Brewery will be unveiling a new beer LOU (the beer, not the ballplayer) as part of the Ales for ALS series.  It will kick-off tomorrow night at the ERB taproom.

Here is the info about the beer and the charity that it will benefit: “As our contribution to the Ales for ALS charity this year, we’re excited to introduce “LOU.” Lou’s a hop forward American Brown Ale with hints of chocolate, caramel and roasted malt flavor. The beer features the proprietary blend of hops created by Loftus Ranches and Hopunion (heavy on the Citra and Mosaic notes) for the Ales for ALS charity. We’ll be releasing LOU here on Thursday, July 10, and $1 of every pint we sell for the duration of LOU (not just the one day) goes towards the ALS Therapy Development Institute. We’ll also be participating in the larger Ales for ALS event up in Alameda at Faction Brewing (July 26 INFO). We’re very proud to be able to do our part for such a great cause.”

Helping out while getting a great beer is an easy way to make the world a better place.  So do it.