At the end of each month, I will open up the firkin and pour out what I’m thinking about. It may be a rant, it may be a rave, it may be odds and ends. I hope you enjoy…..the First Firkin 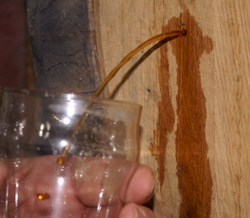 2009 saw Alabama free the hops and raise the ABV limit on beers sold in that state. I say that is about time even more unrational beer distribution and retail laws get phased out if for no other reason than they are economically prohibitive. The City of Los Angeles has 1, that’s right, 1 brewery within city limits. It can’t be a conicidence that there are breweries ringing the outskirts of Los Angeles from El Monte to Torrance. Unfortunately, LA county is not alone in hindering craft beer. Here are some other egregious examples of laws restricting capitalism and our craft beer rights.

In Pennsylvania, no more than two packages of beer at a time may be purchased, unless you are buying from an official “beer distributor”. Great breweries abound in the Quaker state and yet they can’t truly fill a customer’s needs.

There are still some states that ban on off-premises sales of alcohol on Sundays. Tough luck if you want to tailgate and you didn’t buy your beer the day before.

In Kentucky it is illegal to send a bottle of beer, wine, or spirits as a gift to anyone in Kentucky – this can result in a 5-year term in prison. Really? Thanks for ruining Christmas Kentucky Grinch.

It is time to revisit these restrictive laws and find out the true reason they were enacted. What is to gain by restricting sales? or ABV? You are basically telling beer geeks, “nothing to see here, move along”. Is that the slogan you want on your Visit Us in ______
brochures?