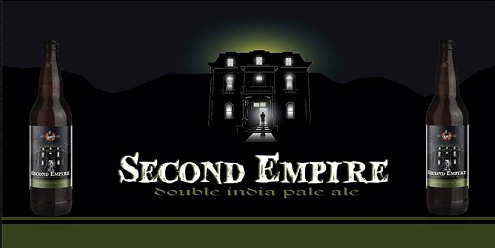 Most breweries are, lets face it, will not wind up in architecture magazines. Unless it is “Inudstrial Park Chic”. But Pomona based Alosta Brewing has done the next best thing. And it is a cool beer meets Halloween event minus pumpkins.

They are releasing their new DIPA “Second Empire.” Second Empire is a style of architecture which is embodied in Disney’s haunted mansion. But there is another example, the Philips Mansion in Pomona conveniently located next to a cemetary.

The DIPA houses a blend of Citra, Amarillo, Apollo, and Cascade hops at a striking 76 IBU’s.

The brewery has partnered with the Pomona Historical Society for a special bottle release event.

Here are the details from the website: “Pre-order your bottle(s) of “Second Empire” and then come by the mansion on Friday, Oct. 14th between 7:30-10pm and not only pick up your order, but enjoy a sample or two. Best of all, you will be able to take a nighttime tour of the mansion itself. A portion of every bottle we sell will be donated to the Pomona Historical Society to help in their effort of restoring the Philips Mansion for future generations to enjoy.”