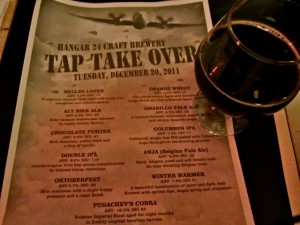 What you see in the glass is the third in the barrel roll series from Hangar 24, Pugachev’s Cobra. It was in attendance last night at Tony’s Darts Away along with a bevy of beers from Redlands.

Joe Savage & Rafael Hurtado from the brewery were in attendance too. Talking to the crowd that grew as the night progressed. (Side note – It has been good to see large turnouts for this and last night’s Library Alehouse FiftyFifty night. Especially in a holiday week)

I started with a sampler tray…. 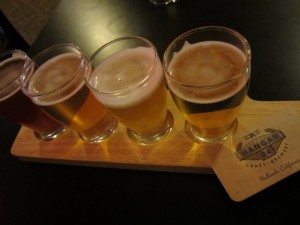 From left to right, you have the winter warmer, Amarillo Pale Ale, Anja and the Helles. I was most surprised by the Helles. It was light and bubbly and filled with grain notes from start to finish. It really tasted fresh and alive. But my favorite of the tray was the Anja, a pro-am Belgian ale that had that light bubbly-ness with some fruit and spice notes and a touch of vanilla. I will order that again.

I did not partake of the Double IPA, yet. I am heading to the brewery itself on Christmas Eve to pick up a bottle or two but I did end the night with a bang. The aforementioned Pugachev. It was thick and viscous. Poured a dark black with an espresso colored head. It was maple syrup sweet at first and then some roasted notes and bourbon crept in to balance. It did not taste like 16.5% alcohol though some aging will probably smooth it out even more. I am glad I have a bottle to store away.