Story Tavern is new this month to the craft beer scene and they have joined the fun that is L.A. Beer Week so I headed over to Burbank for the first chapter of the story. 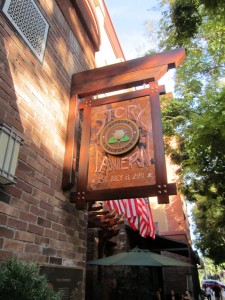 The theme was Rocket to Flanders. Belgian beers and punk rock. The locale was all Craftsman styled except for the fake fireplace below a big screen TV. They had the cool Beer Week posters up though so I sauntered in and since the bar seats were filled grabbed a seat at one of the communal tables. 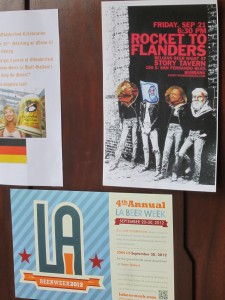 The prices were a bit high for Burbank but they had Beachwood’s Uno Belgian single so that is where I started. I ordered the Belgian stew that promised vegetables and delivered onions only which was a bit of a letdown but it was from the special appetizer section so not a total loss. 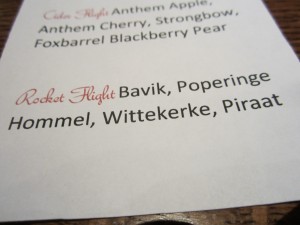 A decent flight to celebrate Belgian beer but I didn’t get much in the way of “selling” the flights or L.A. Beer Week. And it looked like the flight was from bottles which meant extra work for the bar staff and beer that might sit for a bit waiting for the next flight order.

All in all, I didn’t get a vibe of special event nor much education. (I went without saying that I was a beer blogger just to see what sort of help I would get). So I can only give a very mild thumbs up. The beer list was fine. No complaints. Just pricey and below standards that I have set for L.A. beer bars.

Maybe they will grow and upgrade but Golden Road is just down the road and better so they need to up their game.