Cigar City. Critical darlings of the craft beer world have a new beer available for those lucky enough to be in Florida. 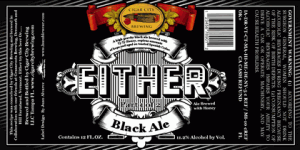 Cigar City Brewing joined forces with Denmark based Grassroots Brewing and Hill Farmstead of Vermont on four beers. Half of the bounty is now close to seeing the light of day. Either and Or, which the labels describe as a high gravity black ale brewed with special honey, hops and aged on toasted Spanish Cedar.