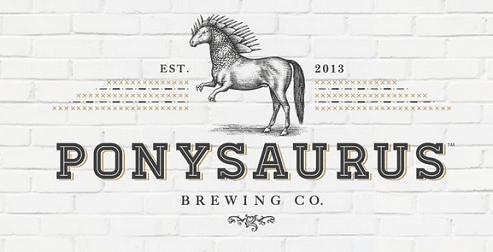 This month we head to Durham, North Carolina. A family friend was in town from the land of Duke and it prompted me to take a peek at breweries in the area. Let’s head to one now….
http://ponysaurusbrewing.com/
Ponysaurus Brewing has an origin story unlike others in that they started brewing in an attic. In what must have been a claustrophhically tiny space that was above the entrance to The Cookery in Durham, NC.

They have been named a “Next Level Brewery” by Food & Wine, and thrillist.com calls their beer “the best pint in Durham, and one of the 50 most underrated breweries in America.”

So here is a sample taster tray to peruse….
Oyster Saison
“Brewed originally in collaboration with Durham’s St. James Seafood Restaurant and Raw Bar, this dry, hoppy Oyster Saison is the perfect ode to the sea. 50 pounds of fresh, whole oysters infuse a whiff of ocean breeze, along with underlying notes of minerals and brine.”

Don’t Be Mean To People. A Golden Rule Saison
“North Carolina Farmhouse Ale. Proudly handcrafted and canned by Ponysaurus Brewing LLC in Durham, NC, with the help from other proud brewers and people, who believe in Rule No. 00000001.”

Bière De Garde
“An homage to higher-gravity French farmhouse ales, Biere de Garde roughly translates to “beer for keeping.” Our version reflects the historical realities of this style of farming, when brewers made do with what was on hand. With three types of barley, wheat, rye, and oats, its aroma smacks of apple, pear, almond, and vanilla, with just a hint of lemon rind.”

“Weizenbock”
“German style, using many of the same ingredients in the Weissbier/Weizenbock but with the addition of some darker malts and a little higher ABV. We brew this beer with all German malts, hops, and yeast.”