We have reached the 2nd stop pulled from the book Complete IPA – The Guide to Your Favorite Craft Beer, Great Notion Brewing of Portland, Oregon. 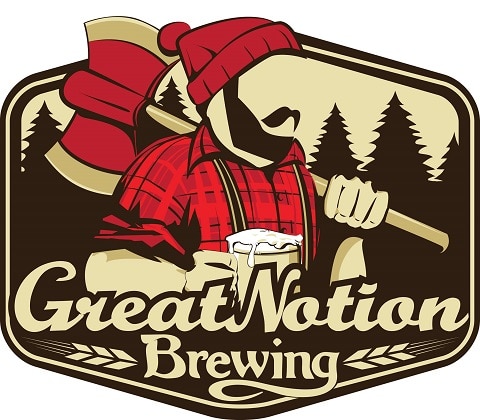 What a combo! Great Notion Brewing is next to a Pine State Biscuits. Now if only there were apartments right above.
GNB is a 7 Barrel brewery plus tap room in N.E. Portland which is appropriate since they “focus primarily on juicy New England-style IPA’s and creative sour ales”..

As you will see from my choices, they don’t stop there. Really cool fun fact: they age some of their beers in clay amphoras.
Instead of starting with their lauded hoppy ales, let’s go breakfast first, then finish with more breakfast for the initial taster flight….
Blueberry Muffin Sour Ale
This Blueberry sour will remind you of your Grandma’s freshly baked blueberry muffins!

Mandela (with Nelson) IPA
Mandela (w/ Nelson) is an IPA brewed with Citra, Mosaic and dry-hopped 100% with Nelson Sauvin hops from New Zealand.

Over-Ripe IPA
Over-Ripe is an experimental IPA brewed with Azacca, Simcoe, Columbus & Motueka hops. We get loads of overripe fruit like cantaloupe, honey dew, and papaya.

Juice Box Double IPA
Bursting with pungent American hops, with aroma’s of peach, mango, and passion fruit. Juice Box is brewed with over 4 pounds of hops per barrel, but the creamy smooth mouth feel and mellow bitterness makes this Double IPA dangerously drinkable.