It’s my go.  This month is when my shot is scheduled to happen.  Let’s hope it goes well and well for all of you as well.  And this month, there will be plenty of fun beer info for vaccinated beer fans.

~ e-visits to (3) breweries to plan a brewery and distillery visit to
~ special featured reviews of beers from Three Weavers in Inglewood and Athletic Brewing in San Diego
~Heads-Up on Los Angeles Beer Events (not as far in the future now, events)
~ Three suggested beers to buy this month. One light, one medium and one dark
~ A Book & A Beer reads The Glass Hotel by Emily St. John Mandel
~ A Podcast & A Beer listens to God Awful Movies
~ Great Beer names and Best Beers of the Month
~ I will tap the Firkin and give my no holds barred opinion on the craft beer world.

If you have the creative side and love taking beer photos than the new April seasonal, Scarlett on Brett from Fort Collins Brewing will allow you to take wild photos to match the wild ale and maybe win a prize.

The beer is an 8% a wild ale using that wild Brettanomyces yeast strain in the primary fermentation. Fort Collins Brewer Shaun Salyards, explains further, “As a primary fermentation strain, brett will create tropical flavors. While we wanted to showcase the brettanomyces, we also wanted to make the beer drinkable and that’s what I love about it. It remains approachable but hopefully educational for folks who haven’t tasted a primary fermented brett beer.”

…a bit presumptious but the beautiful game is the one time that I can probably get away with it.

As threatened, here are a few more pictures of the lace this time with extra foam.  Maybe a bit of a Rorschach test.  What do you see? 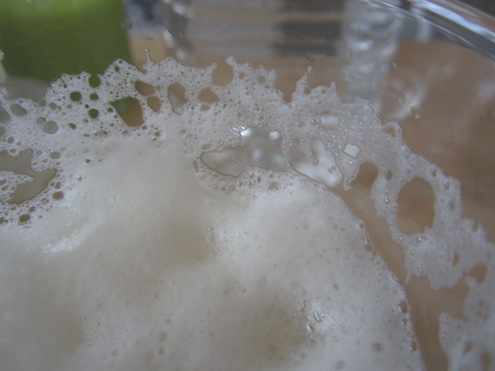