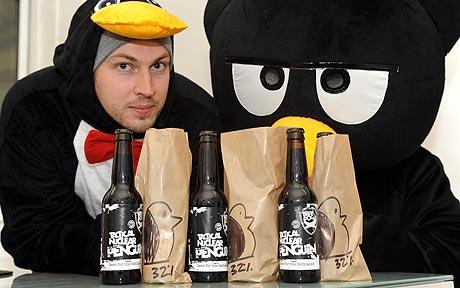 The inventive folks at BrewDog are at it again“BrewDog brewers of Fraserburgh described TACTICAL NUCLEAR PENGUIN the 32 per cent proof tipple as its “most audacious and ambitious project to date”.

BrewDog, which describes itself as making “progressive, craft beers” was previously responsible for an 18.2pc drink called Tokyo which it claimed had been “banned” by the Portman Group, the industry body which runs a voluntary code of conduct.

It also made a low alcohol brew which it mockingly name “Nanny State”.

Only 500 bottles of its latest beer have been produced, with half going on sale for £30 each and remainder offered for £250 with a share in the company also on offer.

In a posting on the company’s website, James Watt, the managing director said: “This beer is bold, irreverent and uncompromising, a beer with a soul and a purpose, a statement of intent.”

He added: “Beer has a terrible reputation in Britain, it’s ignorant to assume that a beer can’t be enjoyed responsibly like a nice dram or a glass of fine wine.

“A beer like Tactical Nuclear Penguin should be enjoyed in spirit sized measures.

“It pairs fantastically with vanilla bean white chocolate it really brings out the complexity of the beer and complements the powerful, smoky and cocoa flavours.”

A warning on the label advises drinkers to take it in small servings: “and with an air of aristocratic nonchalance. ”