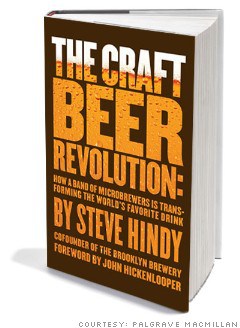 The Craft Beer Revolution by Steve Hindy is the behind-the-scenes business version of craft beer’s rise in the last 40+ years.  Think of it as a companion piece to The Audacity of Hops by Tom Acitelli which charted the rise from the brewing and people perpective.

I almost forgot the sub-title: How a Band of Microbrewers is Transforming the World’s Favorite Drink.

Hindy, was a co-founder of the very influential Brooklyn Brewery.  Which has given the craft beer community such great beers as Local 1 and their Black Chocolate Stout and Sorachi Ace.  It is also where beer luminary Garrett Oliver brews.  So their roots are deep.

At first, I thought this was going to be all old news but by the middle of the book, I was gaining new knowledge about people as diverse as Kim Jordan of New Belgium and the recently passed Jack Joyce of Rogue.  And unwittingly, (I think) Hindy makes Boston Beer and Jim Koch into a special interest irritant.  I finished the book thinking less of Koch and the Sam Adams brand.

Of more interest to me was Chapter 7 – Beer and the Media.  But this chapter, while providing the back story to RateBeer and BeerAdvocate doesn’t have the insights that start to occur with more frequency as the book goes along.  I would think that mentioning Jay Brooks or Jeff Alworth or beer bloggers in general would warrant a paragraph or two.

But where the Media chapter falls flat, the chapter on distributors is more illuminating.  Maybe because I know less, so I am more apt to be amazed by facts like Reyes Beverage Group being the largest distributor in the US and it started in 1976.  A skosh before the craft cause.  And drilling down, the laws and changing alliances around taxes and states rights and the emergence of the BA is all fascinating stuff.  You can almost picture what would have happened if events had happened differently.

And when Hindy reaches what he calls the “Third Generation” the book really kicked into high gear.  I was dog-earing pages left and right.  Discussion of what size works best from multiple viewpoints is a topic for a whole book alone.  And hearing about a CSA style of brewery started me to thinking about how that could work here in Los Angeles.

But the summation quote came from Dan Carey of New Glarus in Wisconsin and I am so glad that it is now immortalized in book form.  Carey says, “The idea of the huge megashippers is not the norm.  That was the deviation.  We are not the deviation.”  I have often thought about craft vs. the BMC in terms of going back to the roots but I hadn’t thought about it as succinctly as that.

Overall, this book book works more on the political and business level than on the love of beer level.  Though that sentiment hangs over the book.  And as I said before, it is a great companion to the Audacity of Hops.  Together they make a great history lesson on craft beer.  Where we were and where we are going.