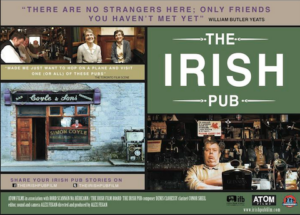 In our (and my) rush to talk about new beers and new breweries, it is easy to forget the third places that have existed for years and really serve a vital role. The simple pub.

There is a scene in The Irish Pub where one of the owners of a traditional Irish pub states that you don’t need a psychiatrist if you can pop dish to pub and have a “chat” with the other regulars. There is truth to that.

This documentary on Netflix runs an hour and fifteen minutes and does a fair survey of pubs from big city Dublin to other corners and crannies of Ireland. Topics like, the Snug, music, economics, regulars and others get asked at each locale and you learn not only about the pubs and people but about the country too.

You could argue that this isn’t beer related or craft beers related. And you would be right. This is most certainly NOT about beer or whiskey but rather the people that serve it and consume it. The cinematography is well done. It is easy to photograph a pub exterior (which they do) but another thing to light the interior of a bar area that re-creates what it would look like if you were drinking there while seeing the person interviewed.

Check this doc out with a pint of Guinness in hand.