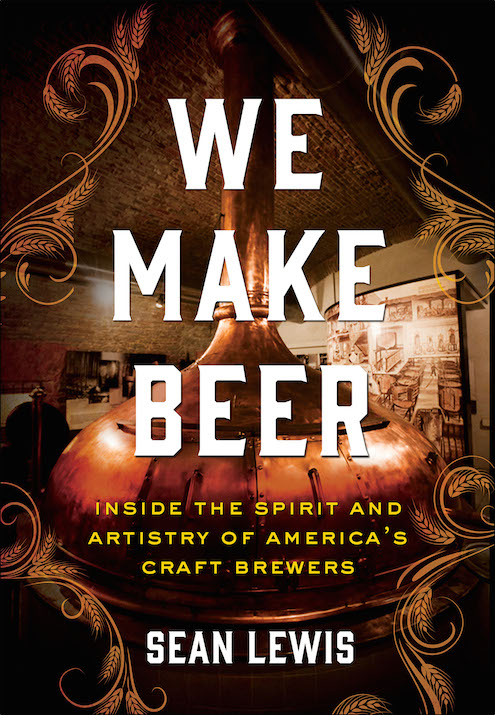 I so wanted to really like this book.  A book based solely on the personalities of brewers and brewery owners.  No lengthy prologue on how to make beer, no list of top beers, or another re-hashing of why and how craft beer came to be. Plus the author has a great first name!

But “We Make Beer” by Sean Lewis felt thin.  Clocking in at close to 200 pages, I sped through it in one afternoon.  On the positive side that meant the book was never boring.  I have many books this year that were just like slogging through mud.  This was lively with a far ranging cast of characters.  I learned about the genesis of brewing operations from Nebraska to the East Coast with stops to talk with Greg Koch, Jeff Bagby, A.J. Stoll and Matt Brynildson for those of us in California.

But rather than format the book to have a chapter cover one brewer or brewery, each chapter was split between two.  This led to a somewhat disjointed structure where you would be happily reading about one person and then that would get dropped to talk about another one.  Typical of the problem was a paragraph and 1/2 mention of the brewing scene in Bend, Oregon.  I started to think that I would get a tidbit of info about a scene that I know little about but it was not to be.  ‘Twas a teaser and then gone, not to be mentioned again.

I can tell if a beer book is good by how many dog-ears I have made.  There were a total of four here.  One being a mention of Sriracha ace and writer Randy Clemens.  I liked the mention of IPA as an acronym for “improves profits automatically” and there was an all too-brief passage about consistency and uniformity in a small batch crafted product that I could see being turned into an impressive full length magazine article.  But I found little else of import in the pages.

That doesn’t mean that others would find it lacking.  A newcomer to craft beer might see this as a whole new world.  But from the standpoint of a blogger who has read quite a few books about the fermented arts, this seemed to touch on topics that have already been covered.  Either focus on one brewer or expand the stories.

And I must say, I was turned off by the attitude of the main brewer who is a through thread from page 1 to the end.  Andris Veidis from Blue Hills Brewery is introduced as someone who makes fun of a beer geek (OK maybe a snob) who had the temerity to explain the flavors that he was getting to the brewer and in return is immortalized as out-of-touch and not understanding the awesomeness the brewer had achieved.  It gives the book from page 4 a tone of, brewer as can’t do wrong while consumers are a fickle lot to often swayed by hops and the interwebs.

Maybe it is me.  The back jacket has praise from Maureen Ogle, Steve Hindy and Jim Koch. But I found this book too slight to recommend.