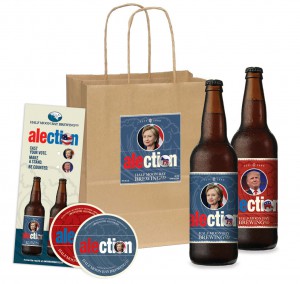 Half Moon Brewing Company’s third “Presidential Alection” is set to commence and it is a much better way to be patriotic than listening to speeches or seeing what noxious tweet that the Ooompa Loompa has sent recently.

You can buy either the Blue hued label for Hillary or the Red for Republican or you can create “your own “SuperPACK” of two Alection IPAs for $12*. The SuperPACK also includes a set of two collectable Alection coasters and a ballot.”

If that is not enough, instead of donating to the campaigns, the brewery will donate $1 to Common Cause’s non-partisan voter protection fund for every bottle of the West Coast IPA sold.
Per the brewery’s press release, “In the 2008 and 2012 Alections, the Brewing Company’s Obama Ale beat the McCain and Romney Ales, respectively, and ultimately predicted the eventual real-life victor. Results for 2016 will be posted on Election Day.”