Slowly but surely, I have been visiting the new breweries of SoCal.  And now it is Absolution Brewing in the spotlight. 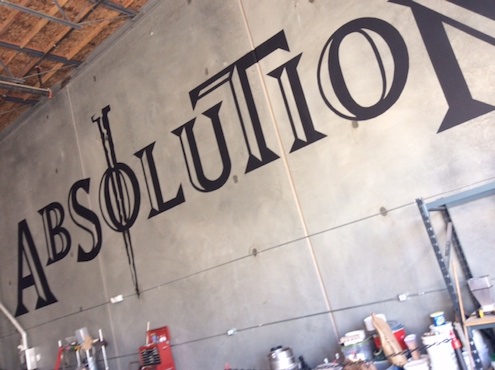 As per craft usual the brewery sits in a big warehous-y space. Nice wooden bar with a dark wood on top and the base made out of barrel staves. Big chalkboard cpvered walkin with large wooden tap handles but only four of the beers on tap when I visited.   Lots of kegs sit in a row like soliders. Since their soft opening in the first weekend of March they have had big crowds which makes the pew sitting seem like a bad choice. It forces you to stand at the bar with your taster tray. And that is what I ordered….
Sinner Stout – Which is light with a good roast taste.  Their porter has more ABV to it.  Could use a little more backbone.
Possessed porter – a little on the root beer-ish tip to me. Too light to me. They use it as a base for other experiments but still needs more oomph.
Fallen Angel – This was a citrusy soapy creamsicle of a beer.  Not much hop bite to it.  More XPA than IPA to my palate
Cardinal Sin – Another so so offering. Not much to it. Not bad.  But nothing jumps out at me. 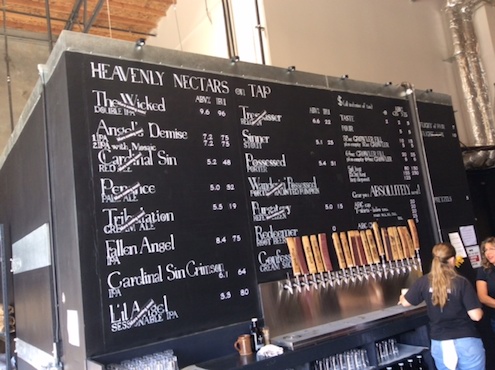 I will have to visit when more of the line are unveiled to see if the others are better representations of the brewer and also to see how they grow.  They are currently behind the other Torrance breweries and I would suggest them before Absolution. (for now)