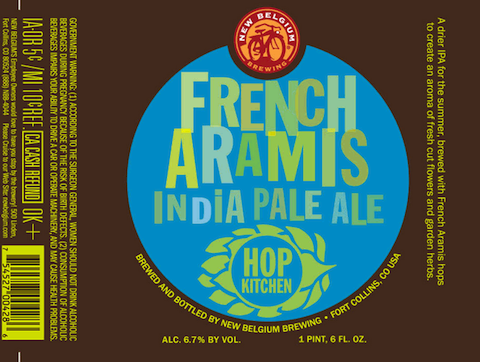 For awhile it did not look like New Belgium would play the hops game.  They seemed content with their sours and barrels and their lovely flagship Fat Tire but since the release of Ranger they have caught the bug and now they have an entire Hop Kitchen!

Out of the kettles of the Hop Kitchen first is Hoppy Bock Lager followed by the beer whose label you see on this post,  French Aramis that utilizes an under-used hop variety grown in the French region of Alsace. Still in “the oven” so to speak will be an IPA using Oregon hop varieties.  These unnamed hops will be certified by Salmon-Safe, a nonprofit “works to keep our urban and agricultural watersheds clean enough for native salmon to spawn and thrive.”  They have worked with Deschutes in the past.  A final Hop Kitchen IPA will take us time traveling to hops that were popular back in the day.  The days being the ’80’s and 90’s.